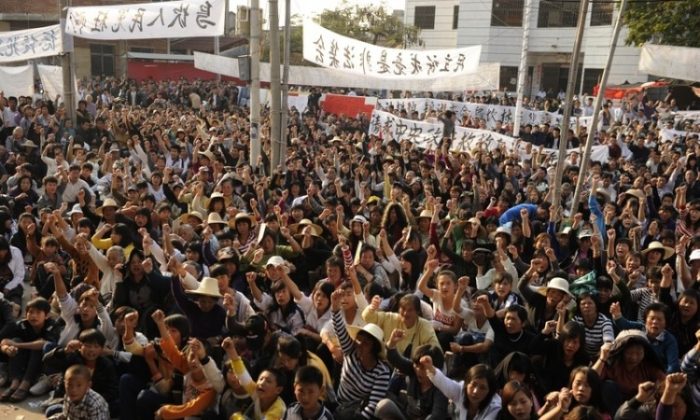 Residents of Wukan, a fishing village in the southern province of Guangdong, rally to demand the government take action over illegal land grabs and the death in custody of a local leader on December 15, 2011. (Peter Parks/AFP/Getty Images)
China

Wukan Villagers Step Up Protest in Face of Police Blockade

Chinese from Wukan Village, a hamlet of 20,000 that is now surrounded by paramilitary forces, have stepped up their protests, calling for a gathering in Beijing and holding a rally against corruption.

The Wukan Village in southern China that has been taking care of itself since Monday after it kicked out Communist Party representatives was besieged by police on Dec. 14. Now villagers and the authorities are in a standoff. The latter has set up a blockade, allowing neither entry nor exit for supplies, food, and water. The tensions that led to the current impasse have been simmering for three months.

Wukan residents who currently study and work in other places in China have announced plans to launch an appeal, or protest, in Beijing on Dec. 21, according to Mr. Chen, a village resident reached by telephone, in an interview with The Epoch Times.

“The 20,000 Wukan people that are contained by police are facing a crisis of survival. I represent all the villagers and call for people across all of society to gather in Beijing on December 21,” Chen said. “I hope all Chinese will join in this righteous act, in helping support the Wukan villagers!”

Over 30 people have already arrived in Beijing for that purpose, he said.

Further, on the afternoon of Dec. 15 villagers held a rally, yelling slogans including, “Down with corruption!” and “Blood debts must be paid with blood!”

Chen said that while Chinese media has come to the village, its reports have not been honest. Instead it has served to spread Chinese regime propaganda related to the standoff and the official violence associated with it. He said that villagers have felt a sense of helplessness, seeing the false information circulated across China.

The beginnings of the current dispute can be traced back to September, when villagers became frustrated by land grabs orchestrated by local officials. Protests by residents led to crackdowns by police, which then met with a robust counterresponse, including police cars being overturned and Communist Party buildings being ransacked.

After driving out communist operatives, villagers set up their own groups: a “Villagers’ Provisional Council” and a “Women’s Representative Union,” to safeguard their rights and coordinate mediation with the Party.

Video of the genesis of the Wukan protests compiled by C. Custer of the ChinaGeeks blog

On Nov. 21, several thousand villagers marched to the Lufeng City government for a sit-in demonstration with banners reading among other things, “Anti-dictatorship.”

The situation escalated about a week ago. On Dec. 9, Lufeng City authorities determined that all the organizations established by the villagers were “illegal,” and arrested five representatives.

In the early hours of the morning on Dec. 11, more than a thousand fully armed policemen prepared for another round of arrests—and were again met with angry villagers wielding makeshift weapons.

That night, one of the villager’s five representatives who had been arrested, Xue Jinbo, died in police custody. He, along with the others captured, were tortured, according to villagers.

Some were forced to sign “confession” documents admitting to working with “foreign forces” to “incite” local residents, a propaganda line frequently deployed by Communist Party authorities in similar circumstances, in an attempt to delegitimize popular discontent.

On Dec. 14, the regime announced autopsy results from the Zhongshan University forensic center claiming, “No signs of external injuries were found” on the body of Xue Jinbo.

However, when the man’s family went to the hospital to claim his body on the evening of Dec. 12, they found that he had widespread bruising, his head was misshapen, his face swollen, his fingernails had been removed, and that a number of his bones had been fractured. Family members were not permitted to take his body home or take pictures.

Xue’s death further infuriated locals, who established a funeral hall and began mourning. They attempted to leave the village to protest, but were blocked by police.

One resident uploaded a video to Sina Weibo showing over 10,000 villagers yelling, “blood for blood,” and “give back the body.” Some wept, while others tugged on the clothing of a reporter, asking for help.

Local communist authorities announced on Dec. 14 that the relevant CCP secretary will be investigated. But the standoff continues: A large number of riot police, with armored vehicle support, are assembled on the outskirts of the village, awaiting Communist Party orders.

It is yet unclear what will happen next, but the historical precedent does not bode well. Less than an hour’s travel from Wukan lays the village of Dongzhou. In late 2005 a protest there was violently suppressed by authorities, who opened fire on villagers, killing dozens of them. Police are reported to have approached unarmed people who were lying on the ground after being wounded by police gunfire, and shooting them dead. They are also reported to have burned some of the bodies to destroy evidence. A campaign of pro-Communist Party saturation propaganda followed.