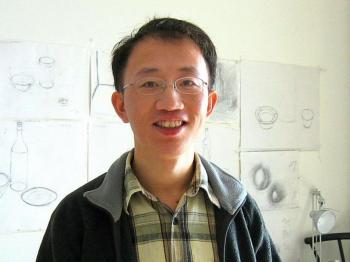 Sacharow Prize Winner: In 2008, the European Parliament - in spite of threats from the Chinese Communist regime - honored Chinese writer Hu Jia with the 'Sacharow-Prize for Intellectual Freedom.' The recognition carries a monetary reward of 50,000 Euros a (Verna Yu/APF/Getty Images)
China

By Renate Lilge-Stoedieck
Print
This year, Human Rights Watch (HRW) announced that four Chinese writers are among the 37 Hellman/Hammett award recipients from 19 different nations, honored for their courageous stance in the face of political persecution. This year, four of the prize winners are from China and are part of a group that is persecuted for political reasons. The group has writers and dissidents who speak out against regimes and officials who misuse their power to oppress the people.

Reporter and human rights activist Hu Jia, 34, was sentenced to three-and-a-half years imprisonment in 2008 for allegedly inciting "the overthrow of the Chinese regime." He has been active for years, raising awareness of human rights abuses, and intervening for HIV-infected patients and the environment. He was nominated for the Nobel Peace Prize in 2008 and 2009.

Author and poet Shi Tao is known worldwide fell victim to Yahoo's collaboration with Chinese police in their effort to ferret out dissidents. He was sentenced to ten years in prison in 2005 for "revealing state secrets to the enemy." Written documentation of the verdict clearly shows the assistance Yahoo provided to the police. Yahoo's CEO provided China's secret police with copies of Mr. Tao's e-mail communications, enabling the police to track him and and arrest him.

Author Tsering Woeser lost her journalist license and lives under house arrest in Beijing. She was singled out by the communist regime for publishing a book of short stories. Her crime was to promote ideas that were "harmful to the unification and solidarity of our nation," The book "You Have the Guns, but I Have a Pen," was recently published in Germany. The book is a collection of essays from interviews with people throughout Tibet dealing with current events. The publisher is Lungta, a "Tibet Initiative German" publishing house.

Poet Nurmuhemmet Yasin was sentenced to a 10-year prison term in 2005 "for inciting separation of Uighurs from China." In October 2007, the PEN-Zentrum Deutschland [PEN German Center] suggested that the sentencing was based on the publication of the essay "Wild Pigeon." The protagonist, a young pigeon, is captured by humans, is caged, and commits suicide rather than sacrifice its freedom. The bird says before its last breath: "The poison form the strawberry courses through my body. It seems as if my soul is aflame–soaring freely."

The Hellman/Hammet Award is an annual prize that is managed by Human Rights Watch. The program provides grants to writers worldwide who have been or are victims of political persecution and are in financial need. The grants are financed by funds from the Lillian Hellman and Dashiell Hammett estates, respectively.

Hellman was interrogated by the U.S. House Un-American Activities Committee (HUAC) and novelist Hammett by the U.S. Senate International Security Subcommittee during the time when American politicians, such as Senator Joseph R. McCarthy went on an anti-communist "witch hunt."