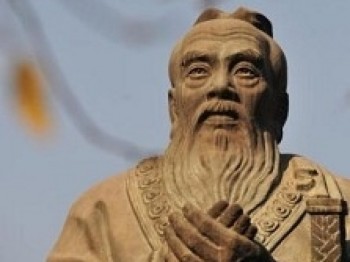 An statue of Confucius in Beijing in 2008. Critics of the regime say that the real purpose of its recent awarding of scholarships and setting up of Confucius Institutes in Africa is to gain political influence in the region. (Frederic J. Brown/AFP/Getty Images)
China

In its desperate bid to hold on to its totalitarian power, the Chinese communist party (CCP) is resorting to Confucius worshipping.

The great Chinese philosopher Confucius is believed to have been born 2,562 years ago. This year the Chinese regime organized festivals and lavish ceremonies in many places to commemorate Confucius’ Sept. 28 birthday. In Qufu of Shangdong, the homeland of Confucius, as many as 5,000 people attended a ceremony.

Paradoxically, the Communist Party established itself in China by ruthlessly eliminating all ancient Chinese philosophy and wisdom teachings, including Confucianism, which were the pillars of moral conduct for Chinese society since antiquity.

But in recent years the regime has changed its stance towards Confucius because “it wants to use Confucius to maintain its own legitimacy,” Huang Qi, founder of the Chinese human rights advocacy website 64tianwang.com told The Epoch Times.

Huang said everyone knows that the Kung (Confucius) family tombs were repeatedly and deliberately vandalized during the Cultural Revolution (1967-1977), and that Kung Te-cheng, the 77th generation descendant of Confucius and final person to be appointed as “Duke Yansheng,” fled to Taiwan and never returned to mainland before his death.

“The regime refuses to apologize to Mr. Kung. Under such circumstances, the so-called respect for Confucius is merely a farce,” Huang said.

Freelance writer Jian Yan says that throughout the different Chinese dynasties, Confucius has always been referred to as Supreme Teacher. However, after the founding of the Chinese Communist Party (CCP) Confucius and his teachings were ridiculed as the “Kung family store.”

When the CCP took power in 1949, the attack on Confucianism continued, reaching a peak during the Cultural Revolution. Under Mao’s command, red guards around the nation went into a frenzy burning books, smashing temples and statues of Confucius. Many Confucian scholars were also attacked and beaten to death, and Confucianism was viewed as an antithesis to Communism.

“Today, the ruling power of the CCP is at its weakest. The giant CCP machinery is about to collapse. The CCP is using Confucius as its final straw to stay afloat. The CCP is so desperate that it no longer cares about what Confucianism is and chooses to forget its own 30-year history of trampling Confucianism,” Jian said.

Now the CCP is reviving so-called Confucius studies, rebuilding Confucius statues, and even establishing Confucius Institutes overseas, Jian said. “To those who lived through the Cultural Revolution, the stark turnabout is absolutely ridiculous.”

Retired Professor Sun Wenguang from Shandong University told Sound of Hope Radio that the Confucius festival is part of the CCP’s image-building campaign.

“Confucius advocated benevolence, righteousness, propriety, wisdom and faithfulness. If the CCP is indeed promoting Confucianism, it should give people the freedom to comment on the past sixty years of CCP rule, which is contrary to Confucianism,” professor Sun said.

Since 2004, over 70 Confucius Institutes and over 200 Confucius Classrooms have been established at universities and schools in the U.S. Over 1,000 Chinese teachers, paid by the communist regime, work in these establishments, amidst growing controversy.

Huang thinks the establishment of overseas Confucius Institutes is ripping off Chinese tax payers and disgracing the sage.

Huang said the regime chooses to ignore the dire shortcomings in domestic education, with children of immigrant workers, religious minorities, activists under persecution, and of lower social classes in general, all being denied the right to go to school.

“Under such circumstances the regime spends huge amounts of taxpayers’ money on overseas Confucius Institutes to be used as infiltration outlets. It is embezzlement of tax money and a disgrace to the Supreme Teacher,” Huang said.

“The CCP sees Confucius as a valuable brand name and intends to steal it for its own purposes,” Qi said.

“Communist ideology is a complete failure,” Qi said. “If the CCP flaunts Chinese-style Marxism now, no one will listen to it. So it has to use Confucianism as a shield.”

In commenting on the Confucius Institutes, Jian said it really doesn’t matter to the CCP how it plays the game. The only thing that matters is how to deceive people in order to maintain its legitimacy.

“To sustain the CCP’s ruling status is the ultimate goal. The Confucius Institute is the CCP’s tool to infiltrate and deceive the international community. It may even be used as a spying agency.”