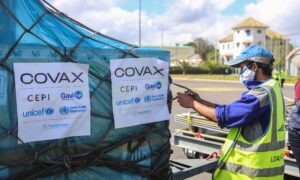 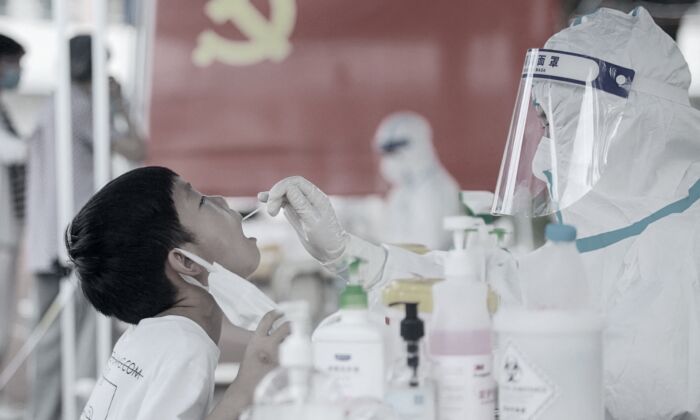 A child receives a nucleic acid test for COVID-19 in Yangzhou, in China's eastern Jiangsu province on Aug. 5, 2021. (STR/AFP via Getty Images)
INSIDE CHINA

In the wake of new delta variant infections spreading through China, the regime is re-enacting harsh, draconian measures on locals in affected areas.

A truck driver and his father have lived out of their truck for five days on the edge of Yangzhou city in Jiangsu province. He says they have only been able to eat instant noodles, as the stringent lockdown stops them from returning home.

“As of today, my father and I have slept on the truck for five days,” Zhang told The Epoch Times on Aug.4.

Zhang Yong (pseudonym) said he has spent four days in near 90 degrees temperature without a shower, sparing gasoline by not running the truck’s air conditioner.

Zhang and his father, despite being in the city, are surviving on their own. Surrounding roads, shops, and residential compounds have been sealed off.

Yangzhou authorities said they imposed a partial lockdown on all its downtown residential communities and allowed one person per household to go out.

Yangzhou reported the first case infected with the CCP (Chinese Communist Party) virus, commonly known as novel coronavirus, on July 28. In the past two weeks, health officials have reported 272 cases, surpassing the figures of Nanjing City, where the recent outbreak began.

However, the Chinese regime has a record of under-reporting its infection numbers. Recent cases have prompted officials to order 4.5 million residents to stay in their homes, cancel flights and trains, and halt bus travel.

Zhang told The Epoch Times that he saw police guarding the exit of the motorway as he entered Yangzhou city on July 30.

“They [police] only required [us] to present the health and itinerary code but didn’t inform me of the lockdown,” Zhang said. “I showed the code to him, but when I unloaded everything and wanted to drive back, I was not allowed to go.”

The Chinese regime adopts a QR code system on WeChat, the country’s most popular social media app, to report a person’s health status, COVID-19 test results, itinerary, and other information. The app collects personal data by tracking the mobile phones’ signal and Bluetooth.

“I called the government hotline and was told they would report it to higher-level officials. They just say it this way,” Zhang said. He said the lack of response has left him worried for his father’s well-being.

In another high-risk area, on China’s southwestern border, residents reported a similar situation of being banned from leaving the city.

On July 11, local authorities found a person infected with the CCP virus had shopped in a store on the street. Then, they took more than 200 people working on the same road to immediate quarantine.

One of those people was Qing Yun (pseudonym), owner of a lottery shop in Jiegao, a small town in Ruili city, bordering Burma (also known as Myanmar).

Confined in a small (6 square meter) room for 21 days, he told The Epoch Times he didn’t have a right to open the window freely on the hot summer days.

Finally, on Aug. 1, the locked door opened, and he was allowed to leave. But he was surprised to learn that he needed permission to leave the city. The Ruili government required people not to go out, with exceptions for those with special needs. Those individuals need to submit documents and wait for government approval.

Qing and his family stay in his friends’ home now. He said that he was lucky as many were struggling to find a place to live under the quarantine.

Another resident from Nanjing surnamed Wang had a job in Ruili city before the lockdown.

“Because the city isn’t allowed to work, many people who are trapped here don’t have an income.”

Wang told The Epoch Times that he had waited for approval to go home for a long time.

He said thousands of migrant workers applied for permission at the local government office every day after authorities announced they would lift the lockdown on July 26. But none of them were allowed to go.

On August 3, officials gave a new stay-at-home order, marking the third round of lockdowns this year. On China’s social media, people complained that the sudden lockdown without any advance notice caused food to rot and businesses to suffer losses.

The recent spike in infected cases in Ruili city started on July 4, driven by the Delta variant.