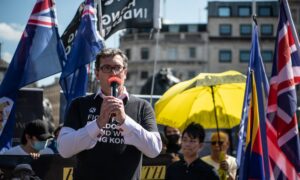 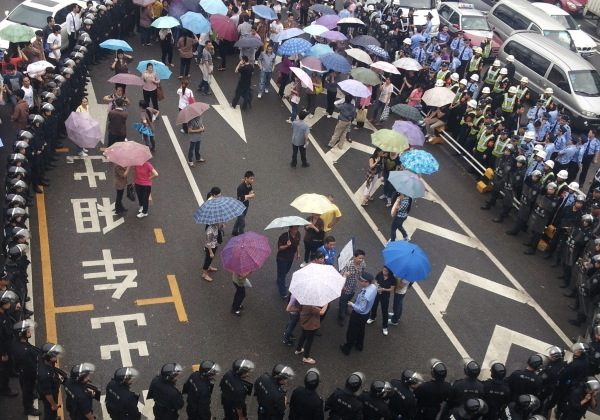 On April 18, about 1,000 workers from Sha Wan Dian Ji Electrical Factory participated in demonstrations. They were stopped by hundreds of special police, who resorted to violence to clear the area. (Weibo.com)
China

Around 1,000 workers took to the streets in protest on April 18, after their employer, a factory in southern China’s Guangdong Province, was unable to continue paying them.

As the Shawan Dian Ji Electrical Factory in the Longgang District of Shenzhen City declared bankruptcy, its employees’ wages went into default, and the workers resorted to street demonstrations.

Riot police soon arrived by the hundreds, and lined up around a nearby overpass to form a wall blocking the protesters. A number of policemen from other departments also came as reinforcement. The confrontation between the two sides lasted for three hours, and many demonstrators were injured or arrested.

Ms. Wang, a Longgang resident, told The Epoch Times that there was serious traffic congestion in the overpass area as a result of the protest.

Mr. Zhang, who lives near the factory, said that, the demonstrators blocking the road had disappeared by 4 p.m. when he was on his way to work, according to Radio Free Asia. He had heard that around a dozen workers were arrested.

An Epoch Times reporter telephoned the Nanling Police Station, near the demonstration area, but the officer who answered the call said he was unsure about the situation.

When the factory was contacted, the staffer who replied said he did not know about the matter, and the related manager was not there.

Translation by Irene. Written in English by Sarah Le. Research by Ariel Tian.