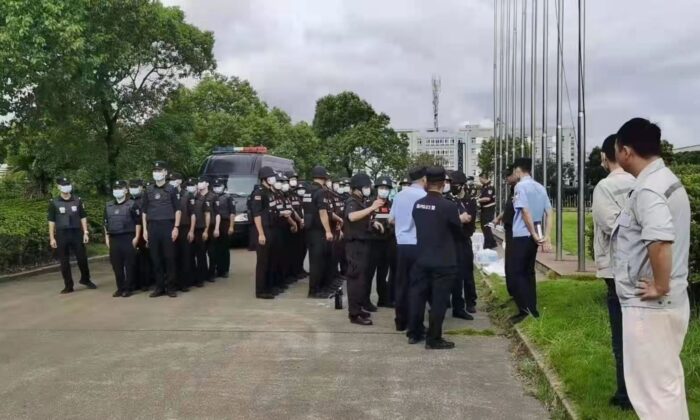 Police surround employees as they rally for a better compensation plan at Samsung Heavy Industries (SHI), in Ningbo city in China's Zhenjiang Province, on Sept. 9, 2021. SHI had announced earlier that it will close its plant in Ningbo. (Courtesy of interviewee)
China Business & Economy

Luo Ya
Luo Ya is a freelance contributor to The Epoch Times.
View profile
Follow
and Gu Xiaohua

A large-scale protest broke out on the premises of Samsung Heavy Industries Ningbo (SHI Ningbo) on Sept. 9. Around 1,500 local employees demanded better compensation schemes after the company announced plans to close its plant in Ningbo city, south of Shanghai. The company issued a letter on Sept. 10, stating that all employees would be terminated.

SHI is moving equipment and products from Ningbo to its Rongcheng plant in China’s eastern province of Shandong. The Rongcheng plant will be the company’s only shipbuilding factory in China.

A document released by the local government, which was later taken down from its website, revealed that the Beilun district government of Ningbo took back 194 acres of land that was leased to SHI Ningbo. It said the move was part of the local government’s plan for industrial renewal, which would bring in more profitable businesses into the city’s industrial parks. Ningbo is the second-largest city in China’s eastern province of Zhejiang.

Several protesting employees spoke with the Chinese language Epoch Times and said they are “standing up for their rights and the livelihood of their families.”

Workers in a Tough Situation

Around 1,500 employees rallied for better compensation, demanding a 3N compensation plan instead of an N+1 plan offered by the company, a group of workers told the publication. They said that protesters held up banners and marched in the factory. Some slept on the ground at night. They said that armed police arrived at the scene, but so far there has been no violence.

The “N” in the N+1 compensation plan stands for the number of years of an employee’s service at a company. According to China’s Labor Contract Law, if an employer terminates the labor contract, the employee would get a month’s wage for each full year of employment, plus an extra month’s wage. The N+1 compensation plan is the minimal compensation standard for employees. For example, if an employee has worked at SHI for 10 months and earns $1,000 a month, then he or she receives a payout of $11,000 (10 months x $1,000 + 1 month) under the plan.

An employee surnamed Zhang (an alias) said that SHI Ningbo’s employees were not taken into consideration when the company decided to shut its plant and when the local government took back the land.

“Most of us are around 40 years old and have worked for the company for about 14 years. We were given a notice on Sept. 10, informing us to sign, to dissolve the labor contract. We are given six days to go through all the compensation payout procedures, from Sept. 13 to Sept. 18. They just told us this was the final chance for us,” Zhang told The Epoch Times.

Another employee surnamed Sheng (an alias) said that he has worked for SHI for almost 12 years. “We are no longer young and no longer physically fit. At this age, we are too young to retire but too old to start a new business. Where do we look for work? No one would even give us a chance.”

SHI established a plant in Ningbo in 1995. It specializes “in the production of ship blocks with iron structures,” produces “200,000 tons of ship blocks per year,” and its annual export amounts to approximately $800 million, according to the company’s official website.

“We have worked hard for the company and we have done a great job. In exchange for our contributions, the company offers us a compensation scheme of N+1, which shows no sincerity of the company,” Sheng said.

“[SIH] says its N+1 compensation scheme is legal. But my question is: is it reasonable?”

The banners that the protesters have displayed in their videos and photos had captions that read: “I need a job to feed my family” and “[My] youth, dream, sweat, tears, and blood are all shed here.” In the videos, some protesters chanted, “I need food.”

A protester surnamed Wang (an alias) said that the local government did not coordinate a negotiation between SHI Ningbo and its employees. “The government is here only for stability maintenance,” she said.

Wang pointed out that industrial workers have limited skills and that it is difficult for most of them to find employment, especially middle-aged workers. She also said that those with professional skills have earned a good income at SHI. “The current average salary of the employees at Samsung Heavy Industries is around $1,550 per month,” she told The Epoch Times.

According to a report by Eworldship.com, a Shanghai-based news outlet on shipbuilding, a Chinese senior manager at SHI Ningbo said that the company will possibly consider the N+3 plan, which means employees get extra compensation of two months’ wages. The report also said that SHI Ningbo’s parent company—Samsung Heavy Industries in South Korea—has given $116 million to SHI Ningbo, which would go toward the employees’ compensation payout plan.

Zhang told The Epoch Times that what the employees want is the 3N compensation plan. He said $15 million would suffice to pay employees if the N+1 compensation scheme is adopted, but the compensation fund of $116 million from the parent company would be more than enough to compensate the workers with the 3N scheme.

Samsung Electronics moved its smartphone and TV production lines out of China in 2019 and 2020, respectively, according to Reuters.

An independent Chinese current affairs commentator and economist, who goes by the pen name “Lengshanshipin,” expressed his sympathy for SHI Ningbo’s employees. He said, “Ordinary Chinese people are now paying the price for the CCP’s [Chinese Communist Party] instigation of nationalism against Japan, South Korea, European countries, the United States, and other democratic countries.”

Some experts believe that ani-Korean sentiment in China was triggered when South Korea and the United States agreed to deploy the Terminal High Altitude Defense (THAAD) in 2016 to counter North Korea’s nuclear threats. The move angered Beijing.

The Chinese language Epoch Times reached out to some employees at SHI Ningbo on Sept. 14. They said they were still negotiating with the company over the compensation plan.

Samsung Heavy Industries did not immediately respond to a request for comment.