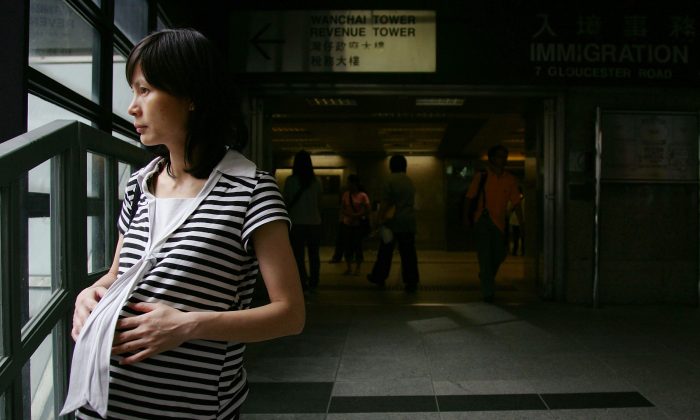 In China, an increasingly high number of Cesarean births (C-sections) are being practiced in the country. The situation has reached epidemic proportions, and some of its serious consequences should make Chinese women think carefully before requesting this procedure. Today, China has one of the highest rates of C-sections in the world, estimated at 46 percent in 2007.

There are several cases of the use of this technique in ancient history. Luzhong, a sixth-generation descendant of the Yellow Emperor, had six sons, all born by “cutting open the body.” Jilian, the sixth son, founded the House of Mi that ruled the State of Chu.

The view that a woman has the right to make decisions regarding her body and her health has led many of them to make a choice regarding the method chosen to give birth. And increasingly throughout the world, women have been demanding to have their children born through a Cesarean section.

A Cesarean delivery on maternal request (CDMR) is a movement that may have started in Brazil, one of the countries with the highest number of Cesarean-born children. The use of this procedure, however, carries some health risks, warns the World Health Organization (WHO), which doesn’t see the advantages of the shift from vaginal birth to Cesarean birth.

In a survey of nine Asian nations, the WHO found that unnecessary Cesarean sections are costlier than natural births and raise the risk of complications for the mother. Many experts still insist that natural birth is the ideal way. “The relative safety of the operation leads people to think it is as safe as vaginal birth,” said Dr. A. Metin Gulmezoglu, who co-authored the Asia report, “but that’s unlikely to be the case.”

The WHO, which reviewed nearly 100,000 births across Asia in 2007-2008, found that 27 percent were done by Cesarean section, apparently motivated by mothers’ requests and hospitals eager to make bigger profits. Slightly higher results were reported by the WHO in a study conducted in 2005 in Latin America, which found that 35 percent of the women surveyed delivered their babies by Cesarean section.  In Europe, there are big differences among countries: thus, while in Italy the Cesarean section rate is 40 percent, in the Nordic countries it is only 14 percent.

There are several reasons why women in Asia prefer to have their babies by Cesarean section. Many women fear the pain of natural birth or worry that their vaginas may be stretched or damaged by a normal delivery. Others, however, believe that this procedure is less risky for the mother. Also, some women choose surgery for their delivery after consulting fortune tellers for “lucky” birthdays or times of the day to have the procedure performed.

Many experts in Latin America have warned about the abuse of the Cesarean section, particularly in countries such as Brazil, where it has reached extremely high levels. Many expectant mothers in Latin America even schedule their surgery to avoid giving birth during special holidays and even in some cases to make them able to attend some parties.

The hospitals financial profit may also be behind the abuse of Cesarean section. For example, in China’s larger cities a Cesarean can cost up to twice the cost of a natural birth. According to the WHO study, 62 percent of hospitals in Asia that were surveyed reported having a financial interest in performing Cesarean sections.

In China, abuse of Cesarean births may give rise to some specific problems related to the health care delivery system. For example, they may provoke an increased demand for hospital beds, anesthesiologists, operating theaters and laboratory and blood transfusion facilities, to the detriment of more serious cases deserving attention. In addition, a study published in Obstetrics and Gynecology found that women who had undergone several Cesarean sections were more likely to have problems with later pregnancies.

According to some experts, the introduction of the one-child policy in 1979 may have contributed indirectly to the increase use of this technique. They claim that because the risk is lower when there are fewer repeat Cesarean sections, parents who expect to have only one child may choose what they believe is the safest option. However, very little is known about the safety of Cesarean section in China, in spite of the fact that such information is much needed.

More studies are now needed in China on the reasons women may choose Cesarean births and an analysis of their consequences on the health of the mother and the child. At the same time, the promotion of midwifery-led maternity care models that emphasize natural birth should be promoted.

César Chelala, M.D., Ph.D., is a global public health consultant for several U.N. and other international agencies. He has carried out health-related missions in 50 countries worldwide. He lives in New York and writes extensively on human rights and foreign policy issues, and is the recipient of awards from Overseas Press Club of America, ADEPA, and Chaski, and recently received the Cedar of Lebanon Gold Medal. He is also the author of several U.N. official publications on health issues, including the book “Maternal Health: The Perennial Challenge.”