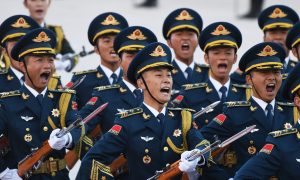 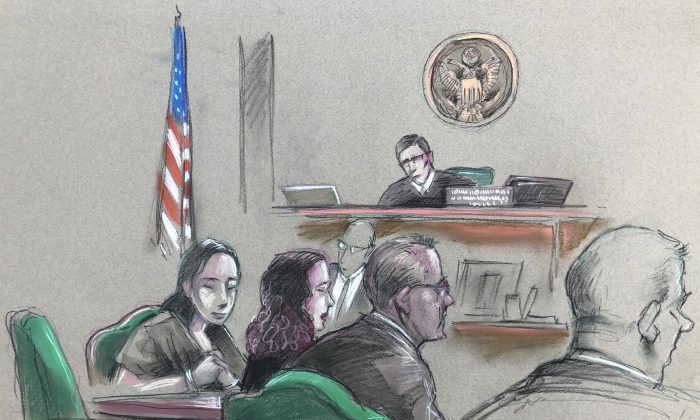 In this artist sketch, a Chinese woman, Yujing Zhang, left, listens to a hearing before federal Magistrate Judge William Matthewman in West Palm Beach, Fla. on April 15, 2019. Secret Service agents arrested the 32-year-old woman on March 30 after they say she gained admission by falsely telling a checkpoint she was a member and was going to swim. (Daniel Pontet/AP)
China-US News

WEST PALM BEACH, Fla.—A federal judge denied bail on April 15 for a Chinese woman charged with lying to illegally enter President Donald Trump’s Mar-a-Lago club, saying there was an “extreme risk of flight” if she were released.

Federal Magistrate Judge William Matthewman issued the ruling for 33-year-old Yujing Zhang, who was indicted Friday on charges of lying to federal agent and illegal entering of a restricted area. She faces up to five years if convicted.

When arrested March 30, Zhang was carrying two passports, four cellphones, a laptop, an external hard drive and a thumb drive possibly containing malware. In her hotel room, Secret Service agents found a device for detecting hidden cameras and $8,000 cash. She is not charged with espionage, but the FBI is still investigating, and prosecutor Rolando Garcia said Monday that future charges are possible. He did not elaborate.

Matthewman remarked that “it appears to the court that Ms. Zhang was up to something nefarious” — a reference to the various electronics she was found to be carrying and that she left in her hotel room.

The United States doesn’t have an extradition treaty with China.

Even if Matthewman had decided to grant bail, immigration officials would most likely have detained Zhang because her U.S. visa has been revoked.

The Secret Service arrested Zhang after they say she gained access to the president’s exclusive club by telling an agent outside that she was a member arriving for a swim. Agents say she wasn’t on the membership list, but a club manager thought Zhang might be a member’s daughter. About 7% of Chinese nationals are named Zhang, that country’s third-most common surname. Agents then asked Zhang if the member was her father, but they say she did not answer definitively. They still admitted her.

Zhang’s story changed when she got inside, agents say, telling a front desk receptionist she was there to attend the United Nations Chinese American Association event scheduled for that evening. No such event was scheduled and agents were summoned. They say she became confrontational, so she was taken off the property and then to the local Secret Service office, where she underwent about nine hours of questioning. She had arrived in the United States two days earlier on a flight from Shanghai to Newark, New Jersey.

Her public defender, Robert Adler, suggested at a hearing last week that Zhang might not have been lying but confused by the language barrier. But a Secret Service agent wrote in court documents that Zhang spoke and read English well during questioning.

An agent told Matthewman last week that when an analyst uploaded the possible malware found on Zhang’s thumb drive, it immediately began installing and corrupting his computer’s files. Garcia said Monday that further analysis has not been able to replicate that action, so there are now doubts about whether it contained malware. He said further tests are being conducted.

Adler said wire records show Zhang paid $20,000 in February to Charles Lee, a Chinese national, for admission to the event. Lee ran the United Nations Chinese Friendship Association and was photographed at least twice with Li “Cindy” Yang, a Republican donor and former Florida massage parlor owner. She recently made news after it was learned she was promising Chinese business leaders that her consulting firm could get them access to Mar-a-Lago, where they could mingle with the president.

Yang previously owned a spa where New England Patriots owner Robert Kraft was charged with soliciting prostitution. Kraft has pleaded not guilty, but also apologized for his behavior.