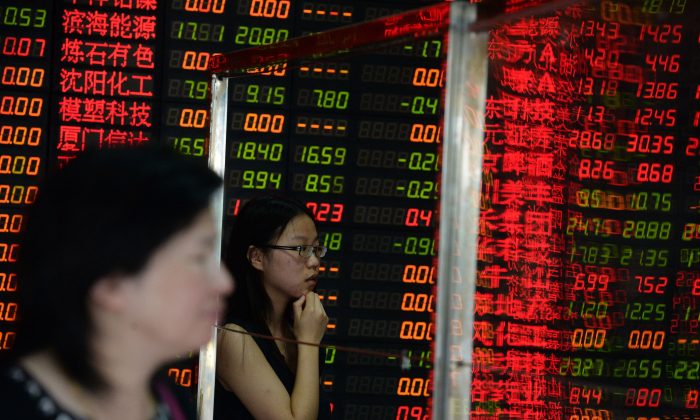 After Crash, Chinese Woman Who Bought Stock on Advice of Hairstylist Pauses to Reflect

Recent gyrations in China’s stock market have caused anger, fear, and in some quarters, deep reflection. The personal experience of one young woman—she blogged under the moniker “Little Green Mulberry”—caught the attention of internet users recently. She wrote about how she got into speculating in stocks, allured by the promise of quick gains, then how she suffered badly in the markets, before coming to the realization that trying to get rich quick is a fool’s game.

While on holiday abroad in 2011, I noticed several middle aged men in my tour group monitoring stocks on their cell phones. With furrowed brows, they traded bad experiences playing the markets.

They are not even enjoying their holiday, I thought scornfully. What’s so great about stocks?

My thinking started to change during a trip to the hairdresser’s in February.

“The stocks are going up; which one did you get?” my hairstylist asked in a discreet manner. I drew a blank.

“You’re an educated person,” he said mockingly. “How can you not be interested in the bull market?”

I returned the following month to find my hairstylist cursing himself for not investing in Internet television company Letv’s stock. “It’s rising 10 percent everyday,” he lamented.

After a restless evening and a chat with a friend who profited from trading, I decided to start investing. The next day, I opened a trading account with a securities company while surrounded by uncles and aunties shouting “up” or “down.”

I won’t be like them, I thought. I will calmly and rationally face the fluctuating markets.

I downloaded the stock trading software, picked up stock market terms and China’s trading initiatives, and started to pay more attention to these words when they appeared in the finance pages of newspapers.

The Letv stock my hairstylist mentioned was still doing well, making over 5 percent daily. Trusting my financial acumen and feeling confident that I would be a capable trader in the future, I rushed in to invest. A friend warned me of the dangers of joining the stock bubble, but I told him angrily: “I’d rather lose money than opportunity.”

Since then, the fate of the Letv stocks consumed me. It became routine for me to be seated in front of a computer at 9 o’clock sharp to monitor the stock markets. I worried about stocks all day, constantly checking stock updates on my cell phone, and feeling anxious at the slightest change. Several times I left the gym for home early because I got angry that my stocks were falling.

I started browsing news about the stock markets automatically, and even felt that CCTV News wasn’t so bad anymore. I too began to consider anyone who talked about stocks as a fellow traveler.

People feared that they could not hop on board; I was secretly delighted for already having a ticket, and dreamt of putting on Chanel perfume.

Meanwhile, I lost my artistic inclinations. I no longer wrote columns, or opened the books I had earlier set my mind on reading.

Stock trading defined my existence. Every single event in the world was ruled by the “butterfly effect” and seemed completely relevant to me—the US stock index affected Hong Kong and China; Party leaders visiting foreign countries signals opportunities; product scams exposed by CCTV today could see falling markets tomorrow; one social media or blog post could mean fluctuating markets the following day. I had emerged from the small world of the arts, and now saw the face of the big world.

But I eventually sold my stock after it fell for two consecutive days. My first lesson from the stock market: Stay away from the Growth Enterprises Market.

But I soon dived back into the markets after hearing an “insider information” that a particular stock would do well; a friend even took an 80,000 yuan loan to invest in the stock. After doing some research, I gained some confidence about the accuracy of the “insider information” and made an investment.

In just a few days, I lost hundreds of yuan. Still, I refused to sell, stubbornly believing that the words “losing money” didn’t exist in my dictionary. I only sold the stock after stumbling upon the “insider information” on the web—it was really an open secret.

Because I sold the stocks when it went up a little, I lost a few hundred yuan again. When the prices went up again the next day, I kicked myself for not waiting a day before making the sale. Two days later, the stock fell to its limit, and I laughed, very content that my decision to sell was the right one.

Two days later, the stock went down to its limit. I laughed, I was right and I was very content about my judgement.

My second lesson from the stock markets: Pay no heed to “insider information.” I am at the very end of the food chain. Any trade secret coming to me is either a rumor or an open secret. The real insider information has already been digested by the elite.

Despite having failed twice, I was not discouraged. I switched tack, and went after blue chip stocks. The One Belt, One Road brought two hot stocks, China North Locomotive and Rolling Stock Industry Corporation (CNR) and China South Locomotive & Rolling Stock Corporation Limited (CSR). Both had gone up more than 400 percent.

I bought CNR stocks even though it went up another 7 percent, thinking that it would go up to its daily limit [Editor: Chinese stocks are prevented from increasing or decreasing by more than 10 percent per day]. I was right; my stock value gained a few hundred yuan on day two. I increased the share and in about an hour, the stock hit its limit again.

With a heart full of excitement, I told my family I would quit my job, and just stay at home and make money through stocks. I perused all news about One Belt, One Road. At the stock market, I heard people shout “all aboard, buckle up,” and boast about making enough for a new car. Another talked about taking a mortgage on his first home and using that to speculate.

On the third day, the stock directly went up to its limit. I had made 5,000 yuan. I used to set my profit targets to the cost of my daily meals; now, I trained my sights on making a big bag of money.

I passed the weekend feeling utterly bored. CNR and CSR suspended trading for a month because it merged on June 1 to form CRRC Corporation. Word on the street was that the stock would go up to 44 percent when it reopens for trading. People feared that they could not hop on board; I was secretly delighted for already having a ticket, and dreamt of putting on Chanel perfume.

On Monday, I nearly got run over by traffic while checking the stock market on my cell phone as I was running some errands. The CRRC stock was fluctuating, and my 5,000 yuan profit became 4,000 yuan. But everyone was telling each other to hang on to their stocks—once you’re out, you can never get back in.

The stock took a deep dive later in the afternoon. My profits were down to 1,000 yuan. Since I was still running errands, I had to rely on my cellphone to sell my stock, but the app froze. Further, the stock trading software refused to let me make a trade that exceeded its perimeters. Watching my shares evaporate, I recalled being told that CRRC was a giant bubble on the brink of blowing up.

Eventually, I managed to sell my CRRC stock. It soon bounced back up again, and I blamed myself for not hanging in there, having only lost a few thousand yuan.

The next day, however, the CRRC bubble burst. Tens of billions of market value evaporated, leaving investors in tears. In hindsight, I was fortunate to have even made 1,000 yuan from the stock.

After experiencing those stock market shocks, I found myself being more anxious than before. The slightest bit of turmoil would send my mood up or down. I’ve not read a book or written an article in the past few months investing, and the energy I put in far exceeded the profits. I gained nothing but the experience of having tried to make my fortune with many other Chinese people, and a few dinner table anecdotes.

I still have two stocks that I bought when their prices were too high. Their value is falling daily, and the money I made from the CNR stock sale has balanced out.

Gradually, I learned to take things easy. I consider my time as a stock trader as an investment in life experience and an inspiration for my writing. Today, I still panic when I see a trading screen full of green [Editor: green signifies that prices have gone down, and red that they’ve gone up, in China]. The only commendable thing I have done is limit my investment. The loss of money has affected my mood, but not my life.

I rarely talk about stocks, but posted two conclusions on Weibo: