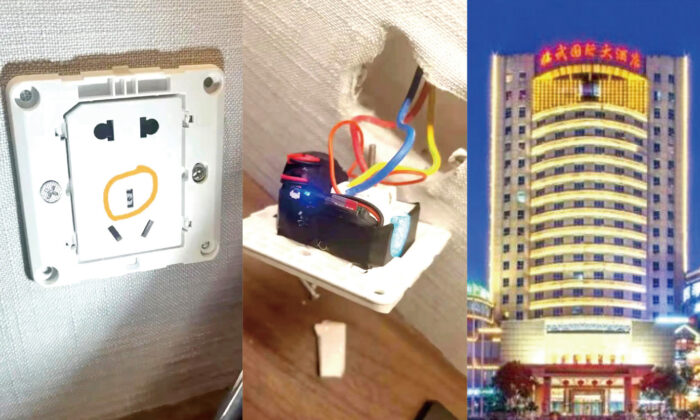 According to The Paper, a Chinese state-owned digital newspaper, on the night of Oct. 7, Ms. Tang checked in at Linwu International Hotel in Hunan’s Chenzhou City. She had recently heard on the news that women are secretly photographed in hotel rooms; so out of curiosity, she started looking for a camera when she entered room 1711.

Much to her surprise, she found a miniature camera in an electrical socket on the wall that was aimed towards the bed.

“Right then, I tried to poke [the socket] with a toothpick, but it wouldn’t go in,” Ms. Tang said. “Immediately, I asked the front desk to bring up a screwdriver. After removing [the socket], we found a camera with the light on, indicating it was operating .”

According to the article, the camera was about the size of a soap bar, had an active blue LED light, and had an SD card. The media later reported that there was already 29 GB of recorded content on the memory card.

Ms. Tang took photos of the device and immediately reported the incident to the police. After taking her statement, the police left with the evidence.

Afterward, the hotel arranged for Ms. Tang to move to another room. To her surprise, she found a camera in the electrical socket in room 1311 too. Ms. Tang said she was beyond shocked.

“The police rushed over, and this time, collected the check-in information of previous hotel guests,” Ms. Tang said.

Ms. Tang ended up staying for the night because it was late, and many of her colleagues were also staying at the hotel.

On Oct. 13, Tong, the hotel manager, told the local media that hotel staff had checked all other rooms after the incident, and found no other cameras.

“The police have yet to conclude their investigation, and the hotel will fully cooperate and accept the results. The guest said she might launch a civil lawsuit, but our hotel is also the victim. We don’t know where the cameras came from,” Tong told the media.

Public information shows that Linwu International Hotel was designed and constructed in accordance with China’s five-star hotel standards. The main building has 21 floors and 167 guest rooms.

Many media outlets and viewers questioned the hotel’s statement, finding the manager’s claim of victimhood irresponsible.

“How can the hotel call itself ‘the victim’?” Red Star News, a Chinese state-owned media, questioned the hotel’s claim.

“Isn’t it too much of a ‘coincidence’ for a guest to find the only two hidden cameras in the hotel? And shouldn’t the hotel be responsible for the privacy of its guests?” Many commented on Weibo, a Chinese social media platform.

The local police are still working on the case, and it is still unclear who installed the hidden cameras that were found.

Hidden cameras are rampant in hotels across China. Hotels in Guangzhou, Xiamen, Zhengzhou, Luoyang, Xi’an, Shijiazhuang, and other cities have reported finding mini cameras in wall sockets. According to Jiemian News, a Chinese state-owned media, in 2016, hidden cameras were found in 35 hotels in 24 cities.

Miniature cameras are easily concealed. According to an analysis by China News Service, they are commonly hidden in buttons, clothes hangers, air conditioners, floor lamps, shampoo dispensers, showers, set-top boxes, routers, water cups, electrical sockets, ceiling lamps, plants, etc. However, the most common places appear to be electrical wall sockets due to the power supply that allows the camera to operate long-term.

The selling of hidden camera footage has become a black industry in China. In March of 2019, the Shandong Jining police uncovered an industry that installed hidden cameras in hotel guest rooms and sold the video recordings online. The police seized more than 300 miniature cameras and extracted more than 100,000 videos from those devices. The principal culprit sold the video recordings like a subscription service. Each camera had around 100 subscribers, who were charged between $16 and $47 per month for a viewing account. There would be an upcharge, ranging from $31 to $63 per month if subscribed through an agent.

The Paper analyzed 66 cases of hotel hidden cameras in March of this year. It found that satisfying personal needs, extortion, and sales are the three primary purposes of the cameras.

An insider told The Epoch Times that the Chinese government also uses hidden cameras for spying and blackmail purposes. They are used not only in hotels but often during foreign dignitary visits and large business fairs. Information from laptops and personal documents is stolen when the person is away from the hotel room.

Another insider told The Epoch Times that many hotel security managers are Chinese Communist Party (CCP) spies. They belong to either the Chinese public security or national security agencies.

Nonetheless, the CCP doesn’t only spy on foreigners, it often targets its own. Sohu News, a Chinese internet news network, reported in 2012 that a man named Qi Hong dismantled more than 40 eavesdropping devices for a Chinese official within a week. Later, many officials came to him for his service. In 2011, he removed more than 300 eavesdropping devices from hundreds of Chinese government officials’ cars, offices, and bedrooms.

Qi said that CCP officials “often hug each other when they meet” to check whether the other party is wearing a spyware device. “Important conversations are usually spoken in bath centers where they can have true peace of mind,” Qi added.