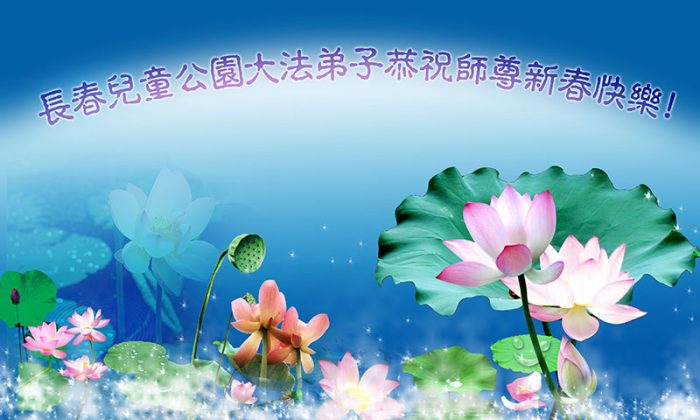 As people in China prepare to celebrate the Chinese New Year, which falls on Feb. 8 this year, tens of thousands made the time to send their well wishes, and to express gratitude, for a Chinese living in exile an ocean away: Li Hongzhi, the founder of the Chinese spiritual practice Falun Gong.

The electronic greeting cards from around China are being posted to the Falun Gong website Minghui.org. The senders are often, but not always, practitioners of the Falun Gong spiritual discipline, a system of self-improvement involving the moral teachings of truthfulness, compassion, and tolerance, and the performance of five exercises. Falun Gong has been targeted for elimination by the communist authorities in China since 1999. It is probably the largest persecuted group in the country.

“My wife is a Falun Gong practitioner, and she recovered her health after she began the practice,” wrote one Chinese citizen. “I thank Teacher Li for giving me a perfect wife.” The individual chose to remain anonymous, given that support for Falun Gong can be punished in China, due to the severe repression. “I wish Teacher Li everything is well and the best of luck overseas,” the man added.

The greetings show that the Chinese regime’s efforts to eradicate Falun Gong in China—a nationwide campaign that was initiated at the highest levels of the Communist Party—has failed to crush the practice, and that many are sympathetic with the plight of practitioners, despite the Party’s propaganda, which attempted to incite hatred against Falun Gong and those who practice it.

For instance, in addition to wishing Mr. Li a happy Chinese New Year, people from Shenzhen in southern China also express solidarity with the practice.

“We witnessed ourselves the tragic reality of how this scoundrel Jiang Zemin used his power to persecute Falun Gong. Jiang has harmed all of us Chinese people,” wrote the individual. “We simply want to uphold justice, we just want to put our names down to join the effort to lodge legal complaints against Jiang Zemin, and have him be brought to justice.”

Jiang Zemin was the Chinese Communist Party leader who declared that Falun Gong was the enemy of the Party and, despite opposition by his colleagues, pushed through a campaign to defame and destroy the practice in China.

Since May last year, over 200,000 practitioners have filed criminal complaints against Jiang Zemin with the regime’s highest courts and prosecuting body, accusing Jiang of genocide and crimes against humanity.

In multiple countries in Asia, over 1 million names have been collected for a signature drive to support the effort to bring Jiang to justice. In Qingyuan County in Liaoning Province, 4,651 citizens either set down their names or added their thumbprints to support the effort, reported Minghui.org on Jan. 6.

A practitioner from Changchun, Mr. Li’s hometown and the first place he disseminated the Falun Gong teachings, wrote: “We disciples miss Master, looking forward to the days when Master returns to his hometown, and we can celebrate the New Year together.”

Of the 23 provinces and 4 municipalities in China, Minghui.org had received electronic greeting cards and well wishes from at least 13 provinces and the province-level cities of Beijing, Chongqing, Shanghai, and Tianjin, at the time of writing.

“Thank you revered Master for your salvation and everything you’ve done. Thank you!” wrote a practitioner from Tianjin.