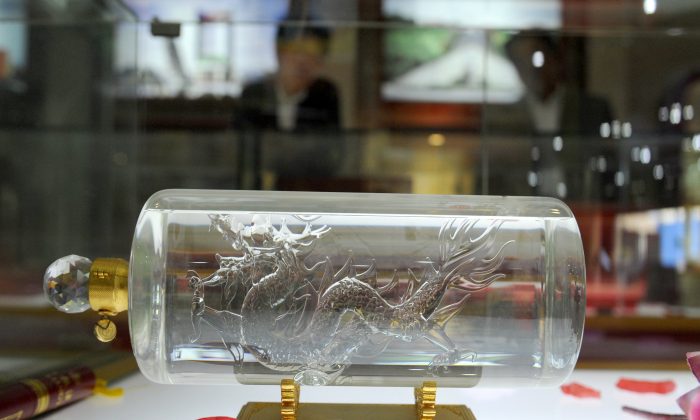 A bottle of "baijiu," or "white liquor" is China's most popular drink. (Liu Jin/AFP/Getty Images)
China

Qinghai Spring announced on July 14 that, during a three-year term, the scientists will not only be responsible for the company’s scientific research, talent training, recommendation and introduction of high-level talent, but will also attend company-related PR activities to promote the company’s image.

Qinghai Spring is known in China for its high-priced products. Presently, the company mainly sells its “Tinghua Liquor,” which is priced at 58,600 yuan (about $8,700) per bottle in its boutique collection, and 5,860 yuan (about $870) in its standard line—much higher than China’s most reputable liquor, Moutai, China’s national drink.

Using alcohol in traditional medicine began a long time ago in China. Nowadays, companies steep herbs in white liquor (baijiu) to make healing remedies with alcohol seen as a catalyst.

Before switching to alcohol products, Qinghai Spring marketed the renowned Chinese herbal medicine Cordyceps Sinensis as powder or lozenges. Its flagship product “Jicao series,” which means highest grade Cordyceps, sold for 29,888 yuan (about $4,439) a box in 2009. With an average of 1,054 yuan per gram (about $157), it was well above the price of gold at the time.

Murad won the Nobel Prize for his discovery that nitric oxide can promote cardiovascular dilation. This discovery subsequently led to the development and production of Viagra for the treatment of male erectile dysfunction, and is widely used in China. Murad was thus dubbed “father of Viagra” by the Chinese, although he is not too excited about this title as the application of his discovery goes far beyond Viagra into research and development of new drugs for cardiovascular, nervous system, cancer, and joint treatment.

Murad discovered that nitric oxide (NO) free radicals play an important role in the study of atherosclerosis, hypertension, diabetes, lung disease, mental illness, and tumors, and may also have anti-aging effects.

In response to his contract with Qinghai Spring, Murad said he was very much looking forward to [exploring] the ability of liquor to change the formation and role of nitric oxide in human tissues, and other relevant experiments.

According to Qinghai Spring, the two professors will enhance the company’s R&D capabilities “into health improvement of liquor from different perspectives,” and promote the upgrading and internationalization of related products.

Murad will guide the R&D team in studying how the brewing process can promote the production of nitric oxide and its effect on human health, and to further the company’s dual objective: harm reduction and benefit increase.

Many people on social media were skeptical and felt the company was just using novel marketing to endorse its sky-high priced liquor to increase sales.

On July 14, the day it made the hiring announcement, Qinghai Spring also announced its semi-annual report, saying that estimated revenue in the first half of this year was 100-110 million yuan (about $15-16 million), an increase of 113-134 percent year-on-year.

Hiring of the U.S. Nobel Prize winners hasn’t brought in a flood of investors.

On the second day of the announcement, July 15, Qinghai Spring’s stock fell 10.0 percent, and fell 2.8 percent further on July 18.