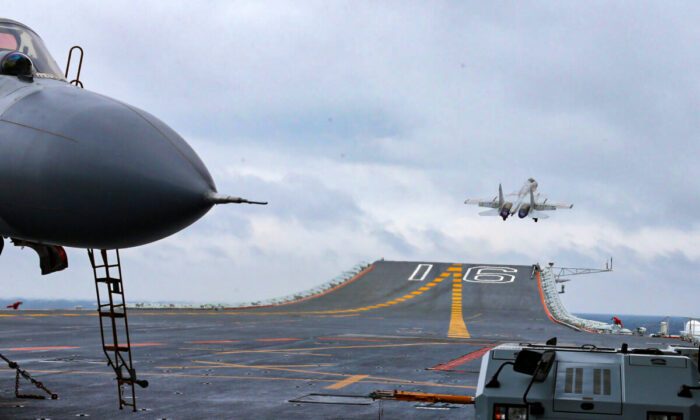 This photo taken on January 2, 2017 shows Chinese J-15 fighter jets being launched from the deck of the Liaoning aircraft carrier during military drills in the South China Sea. (STR/AFP via Getty Images)
Military

The Chinese Communist Party (CCP) is now using purported military drills in the South China Sea to cover up its search for the wreckage for a Chinese military plane that crashed in early March, Taiwan’s intelligence agency said on March 10.

The aircraft is reported to have been a Shaanxi Y-8, which is a medium transport aircraft, but commonly outfitted by the Chinese military to serve as a reconnaissance or electronic warfare element. The plane that crashed may have been outfitted for anti-submarine duty.

The crash itself was first reported by Vietnam-based journalist Duan Dang and later confirmed by Chen Ming-tong, director-general of Taiwan’s National Security Bureau (NSB), in remarks to the island’s parliament on March 10.

The CCP hasn’t acknowledged the crash. Taiwan-based media outlets have correlated the days surrounding the crash with a sudden drop in Y-8 incursions into Taiwan’s air defense identification zone.

Last week, the CCP suddenly announced a week of military drills in waters that it disputes with Vietnam, near where the crash occurred.

The NSB issued a report to parliament, stating that the drills were serving as a cover for CCP efforts to find and recover the aircraft, and Vietnam’s foreign ministry has filed a complaint with China about the drills.

The report also speculated that the drills would be used to “test the limits of the U.S. and other South China Sea claimants.”

Chen told the island’s parliament that he couldn’t provide further details of the incident, given that the case involved sensitive intelligence.

News of the crash closely follows the crash of a U.S. fighter jet in January, which fell into the sea following a landing mishap on an aircraft carrier. While there was concern that the CCP would attempt to salvage the aircraft in order to reverse engineer its technologies, the wreckage was ultimately recovered by the United States in early March.

The drama is just the latest in an ongoing series of standoffs, diplomatic dustups, and military intimidation over many years, through which the CCP has attempted to expand its territorial claims in the disputed South China Sea. The regime’s claims to the sea have been ruled illegal by an international tribunal.

Perhaps the most notable of the CCP’s tactics to exert control over the region has been its creation of numerous artificial islands throughout the area, where it has subsequently stationed military assets. Likewise, the CCP is currently undergoing a massive military buildup, including the expansion of its navy, which is already the world’s largest.

CCP leadership has debated the possibility of invading Taiwan, which it claims is part of its territory, although the island has been self-governed since 1949.