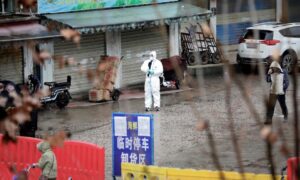 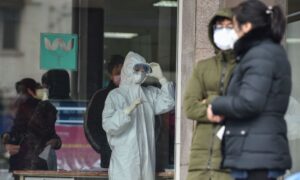 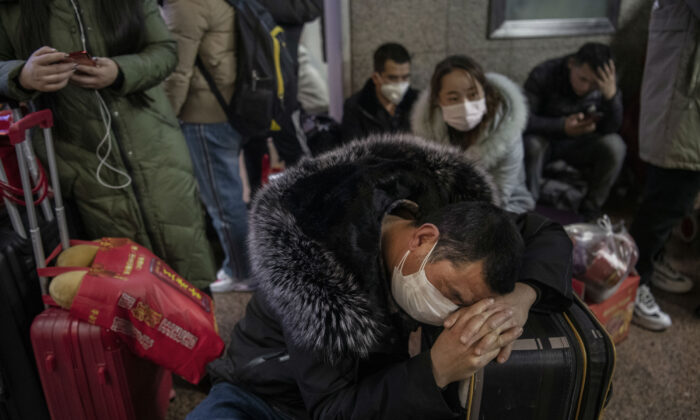 A Chinese man wears a protective mask as he sleeps before boarding a train before the annual Spring Festival at a Beijing railway station in Beijing, China, on Jan. 23, 2020. (Kevin Frayer/Getty Images)
Coronavirus Outbreak

Chinese Viral Outbreak Could Be ‘10 Times the Scale of SARS,’ Expert Says

A leading infectious disease expert has warned that the Wuhan virus could be 10 times worse than the SARS outbreak which killed almost 800 people in 2002 to 2003.

Guan Yi, director of the State Key Laboratory of Emerging Infectious Diseases at Hong Kong University in Hong Kong, said in a Jan. 23 interview with Chinese financial magazine Caixin that his “conservative estimate is that the epidemic could end up at least 10 times the scale of SARS.”

He also criticized Wuhan authorities for its deficient response to the outbreak.

Guan and his team visited Wuhan on Tuesday hoping to track the animal that was the source of the virus, but was shocked to find the lack of precautions taken by the city residents and authorities.

He noted that residents around the live animal market suspected to the source of the outbreak were not taking any precautions or wearing masks. The airport did not have any measures in place to disinfect surfaces or floors, indicating that the city government was being complacent despite pressing orders from central authorities in Beijing, Guan said.

“I thought at the time, we had to be in a ‘state of war’ but how come the alarm has not been raised?” he told the magazine. “Poor citizens, they were still preparing to ring in the New Year in peace and had no sense about the epidemic.”

The new coronavirus has infected scores of people inside China. Cases have also been confirmed abroad, including the United States, Japan, South Korea, Taiwan, and Thailand.

Guan also criticized local authorities for disinfecting the market, saying they destroyed crucial evidence that would have helped researchers find the source of the virus.

“I consider myself a veteran in battles,” he said, referring to his experience responding to bird flu, SARS, and other outbreaks. “But with this Wuhan pneumonia, I feel extremely powerless.”

He added that the “golden time” to contain the virus had already passed, despite the city imposing a travel ban on Thursday, because most people traveling home for the Lunar New Year would have already left the city.

“They might have been in contact with patients in the community and still in the incubation stage when they left Wuhan. They are probably virus carriers on the move,” Guan said.

He said he expected the outbreak to peak over the weekend, noting that the virus had an incubation period of around eight days.