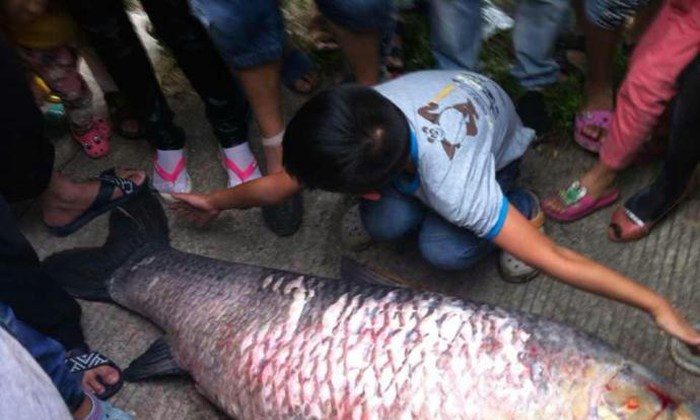 Villagers rushed to capture bighead and silver carp spewing out of the spillway, including some as heavy as 50 kilograms. (Screenshot/Netease.com)
China

More than 200 locals gathered to catch fish flowing out of a reservoir in Zhejiang Province, while excess water was discharged prior to the arrival of Typhoon Fitow.

The Changtan reservoir on the Yongning River in Taizhou has been partially emptied since Saturday to prevent potential flooding downstream, China News reported.

Police arrived to keep the villagers in check as they rushed to capture bighead and silver carp spewing out of the spillway, including some as heavy as 50 kilograms (110 pounds), according to the Global Times.

Netizens commented about the situation on their Weibo microblogs.

One said: “Villagers are always in a rush to loot. I wish that Chinese villagers would not disgrace themselves. Can they eat all this after looting so much? Their behavior insults the reputation of farmers.”

Another wrote: “The reservoir discharged water for the first time in six years. This shows how chaotic small reservoir management is. So-called floods are often caused by poor maintenance of a reservoir’s capacity.”

Typhoon Fitow arrived in Fujian Province on Monday, and is currently affecting Zhejiang.