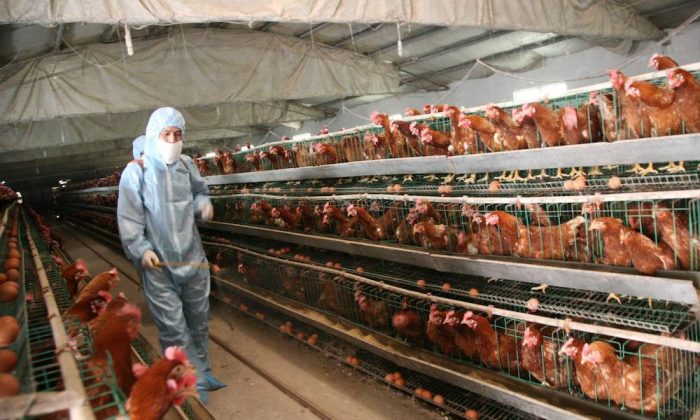 A Chinese health worker sprays disinfectant at a poultry farm in Baofeng on April 17. A senior veterinarian in China says the H7N9 bird flu virus caused outbreaks in poultry last year that were kept under wraps by the regime. (ChinaFotoPress/Getty Images)
China

Since late last year, the Chinese Communist Party has been covering up the worst bird flu outbreak in poultry for over 10 years, according to a senior veterinarian, who has worked with poultry farmers for several decades.

Using the alias Lin Huatai, the vet said in an exclusive interview that the new virus has been spreading through poultry since late November, from eastern China to the southwest.

According to Lin, bird flus with low avian pathogenicity are common in China, whereas highly virulent ones usually strike localized areas. He said the epidemic happened in chickens in Henan, Shanxi, and Shaanxi provinces, and ducks in Sichuan Province. “Shaanxi previously had more than 20 million chickens, but now there are only 7 to 8 million,” Lin said, adding that it has been over a decade since he saw so many chickens dying like this.

The outbreak may have originated in Shijiazhuang in northern Hebei Province last April and May, when 80 percent of poultry died, creating huge losses for farmers, but “no media reported on it,” Lin said.

“It doesn’t matter whether the bird flu happens in chickens, pigs, or ducks–the government definitely doesn’t want such news to spread,” he said. “The international practice is to cull the animals. It’s impossible to kill them all–there are tens of billions of them–it’s too expensive to kill them all!”

After over 16,000 diseased pigs were dumped in the Huangpu River upstream from Shanghai last month, Chinese media started reporting on the large number of different dead animals appearing in other areas.

On March 25, around 1,000 dead ducks were found floating in the Nanhe River in southwestern Sichuan Province.

Four days later, about 600 pounds of dead fish were retrieved from the Sijingtang River in Shanghai’s Songjiang District, according to Oriental Morning Post.

Tons of dead fish were also removed from Cihu Lake in Hubei Province on April 9, state media Xinhua reported. The next day, a large number of dead chickens and ducks were found in the Xinjiang River, Jiangxi Province, according to China News Service.

The Dahe Daily reported that over 1,000 chickens died in three days from April 7 at a farm in Henan Province.

In some cases, local authorities claimed the animals had died from unknown causes, mostly blaming the deaths on cold weather. However, Lin said this cannot be true. “China’s poultry industry spans several decades,” he said. “Poultry farmers definitely wouldn’t let their birds die like that.”

Lin also said the pigs dumped in the Yangtze Delta region must have died en masse from an infectious disease, because an epidemic typically stays latent for some time before it takes hold.

Most of the first confirmed human instances of H7N9 were just downstream of Jiaxing County, where the dead pigs originated. Currently, 31 human cases have been reported in Shanghai, 20 in Jiangsu Province; 21 in Zhejiang Province, and 3 in Anhui Province.

The number of infections being reported in birds continues to be low. On April 10, the Ministry of Agriculture said that, of 3,175 samples collected from live poultry markets and farms from different areas, only 34 tested positive for H7N9, including 21 from chickens, 3 from pigeons, 3 from ducks, and 7 from the environment.

To date, Chinese authorities say that 16 people have died from a total of 79 cases. The World Health Organization noted on April 17 that a number of the infected people have no history of contact with birds.

Lin said: “Bird flu among poultry has contaminated the environment, turning the air into a reservoir for the virus, and that is how H7N9 started infecting people in Shanghai.”

Translation by Hsin-Yi. Research by Jane Lin. Written in English by Cassie Ryan.