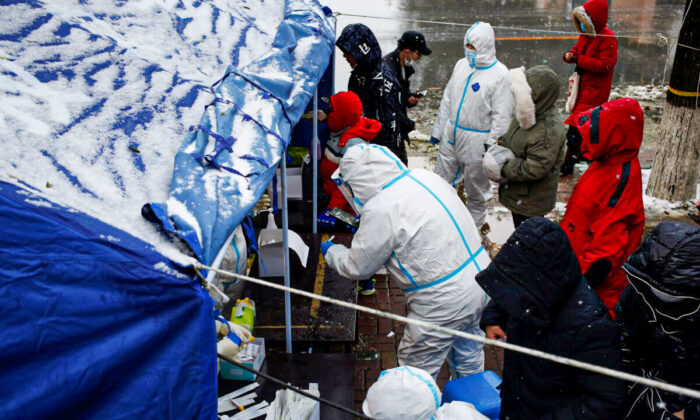 People line up for nucleic acid testing in the snow at a testing site in Dalian, Liaoning Province, China, on Nov. 8, 2021. (cnsphoto via Reuters)
INSIDE CHINA

Chinese Truck Driver and Wife Trapped in Truck, Quarantined for a Month

A Chinese couple was forced to live out of their semi-truck cabin for a month after the city they were delivering goods to went into lockdown over a positive confirmation of the Chinese Communist Party (CCP) virus, also known as COVID-19.

The driver’s wife, using the pseudonym Han Shu, told the Chinese edition of The Epoch Times that she and her husband drove to Zhuanghe city in northern China’s Liaoning Province.

They arrived on Nov. 3, spent the night in their truck, and were trapped by a government lockdown on the following day. China’s top health authority reported that one case was found in the city of 800,000.

The city went into full lockdown, allowing people to only go outside for essential needs, and no one could enter or exit the city.

“The next morning when we woke up, we were told the whole city was now in lockdown and that we could not move,” Han said in a frustrated tone. “The police were everywhere, and they would take anyone wandering in the street to an isolation facility in another city.”

She described the streets as being full of people and traffic on the day they arrived, but barren the following morning.

They contacted the local health authority to ask about testing but were told that they needed to find a testing facility on their own.

Fortunately, they had a full tank of gas and had restocked on food before their trip. They ran their engine for heat as the temperatures dropped below freezing.

Yet their food supply was not meant for daily consumption. Han and her husband had prepared servings of instant noodles and canned porridge for the trip.

“You cannot keep eating instant noodles every day,” Han said. “In addition, we really didn’t feel like eating at all in the lockdown.” She said they had one meal every day during the isolation, resulting in her husband losing over 30 pounds.

Han said they could only use water from their water tank for brushing their teeth and washing their faces, and that they had no place to take any shower during the whole month of quarantine. They also had no income for the entire period.

“After the quarantine we experienced, we have quite a grudge against them.”

Gao Miao and Daniel Holl contributed to the article.