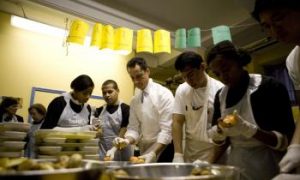 By Rona Rui and Wen Long
Print
South Korea’s Chosun Ilbo reported on Jan. 15 that Chinese troops recently entered North Korea. If true, this would have been the first Chinese army to enter the Korean peninsula in the 50 years since the Korean War ended. Given the "blood alliance” between China and North Korea and the tensions on the Korean Peninsula, the move is regarded as quite unusual.

Although the scale of the Chinese troops being stationed is unknown, sources said that, “At midnight on Dec. 15, 2010, more than 50 Chinese armored vehicles and tanks entered North Korea’s Hoeryong crossing the Tumen River (Duman River) from China’s Sanhe, and residents of Sanhe were awakened by the roar of the armored vehicles,” the Chosun Ilbo reported. (http://chinese.chosun.com/big5/site/data/html_dir/2011/01/15/20110115000006.html)

Around the same time, some people in China’s Dandong also saw military jeeps entering North Korea’s Sinuiju. “Chinese armored vehicles can be used to suppress riots, and the jeeps may be used to control refugees fleeing North Korea,” the report quoted another source as saying.

South Korean and Chinese media recently reported that Chinese workers have completed maintenance construction at the port of Rason. The motivation of the Chinese military’s entering North Korea is neither political nor military, but rather guarding facilities at the port and protecting Chinese workers, the report said, quoting a Cheongwadae (the South Korean White House) official.

The Chinese regime could use the opportunity of stationing soldiers in Rason and send in large numbers of troops to intervene in the Korean Peninsula on the grounds of protecting Chinese nationals in the event of any unrest, Nam Joo-Hong, Ambassador for International Security of the South Korean Ministry of Foreign Affairs and Trade said in the same report.

A source told South Korea’s Dong-A Ilbo that it was possible that the Chinese military could send troops to Pyongyang by the end of 2010 in the name of providing assistance to North Korea's military modernization program; the troops were estimated to be two to three regiments with at least several thousand soldiers, and some commanders were receiving Korean language training and geography and customs-related education in China, according to an earlier report by Chosun Ilbo report on Oct. 20, 2010. (http://news.chosun.com/site/data/html_dir/2010/10/20/2010102000337.html?Dep1=news&Dep2=headline1&Dep3=h1_01_rel01)

Dong-A Ilbo stated that although Kim Jong-il is still alive, North Korea in fact wants to rely on Chinese troops in Pyongyang to protect Kim Jong-un during the chaos when Kim Jong-il dies; South Korean government sources said that allowing Chinese troops to enter is against the principles of North Korean authorities, and therefore makes no sense, according to the same report.