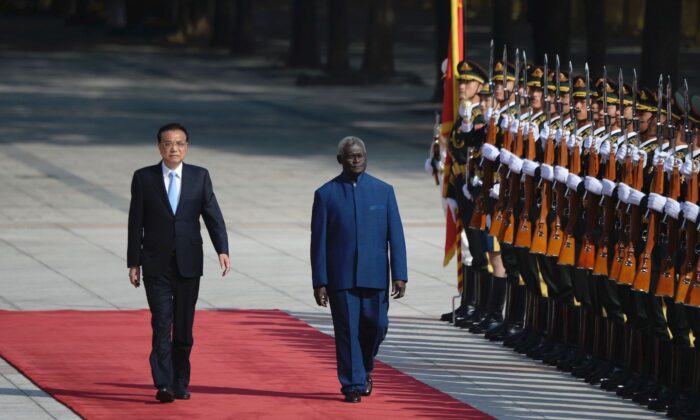 Chinese security forces have taken advantage of a recently signed-off security pact with the Solomon Islands and are conducting training courses for the Royal Solomon Islands Police Force (RSIPF) in Honiara.

The current course, which runs for two weeks, will see a Chinese Police Liaison Team training 16 officers from the RSIPF’s Close Personal Protection Unit and Police Band in protection technical skills and tactics and operational capability.

Ian Vaevaso, deputy commissioner of National Security and Operation Support at the RSIF, said at the opening ceremony for the second training group that the Solomon Islands benefited “deeply and extensively” from the bilateral relationship.

“RSIPF must step ahead of these security challenges and criminal minds. This is why this policing cooperation and the broader security agreement with the People’s Republic of China (PRC) is crucial so that we can be able to holistically build the capacity and capability of RSIPF to another level to protect this nation’s development and its sovereignty,” Vaevaso said.

The head of the Chinese liaison team, Commissioner Zhang Guangbao, noted that his troops were there to “strengthen capacity building and maintain peace and security in the Solomon Islands.”

News of the training comes after the Solomon Islands Foreign Minister Jeremiah Manele announced on May 28 that China was considering a proposal to set up a police training centre in the nation.

The remarks by Manele were made during a joint press conference with his Chinese counterpart Wang Yi, who was on a 10-day trip to eight Pacific Island nations.

A contentious security agreement between the Solomon Islands and the Chinese communist regime has come under scrutiny from Australia, New Zealand (NZ), and the United States, with NZ Prime Minister Jacinda Ardern and former Australian Prime Minister Scott Morrison expressing concerns about the deal.

U.S. State Department spokesperson Ned Price said on May 25 that Washington was aware of China’s plan to have “a range of agreements” with Pacific Islands nations and that it was worried the accords were negotiated in “a rushed, non-transparent process.”

Price said the security agreements showed “little regional consultation, provoking public concern not only in the United States but across the Indo-Pacific region.”

“We don’t believe that importing security forces from [China] and their methods will help any Pacific Island country; on the other hand, doing so could only seek to fuel regional and international tensions and increase concerns over Beijing’s expansion of internal, of its internal security apparatus to the Pacific,” he said.

Meanwhile, the new Australian Labor government has launched straight into implementing its Pacific strategy, with new Foreign Minister Penny Wong spending the end of her first week in the job in Fiji addressing the Pacific Islands Forum’s Secretariat in Suva, where she outlined the new government’s commitments.

“We want to demonstrate to your nation and other nations of the region that we are a partner who can be trusted, who can be reliable. And historically, we have been. I think you’ve seen a lot of Australian development assistance. We want to work with you on your priorities. We want to work together as part of the Pacific family,” Wong said.

However, she also warned of risks for countries accepting China’s push for security alliances in the region.