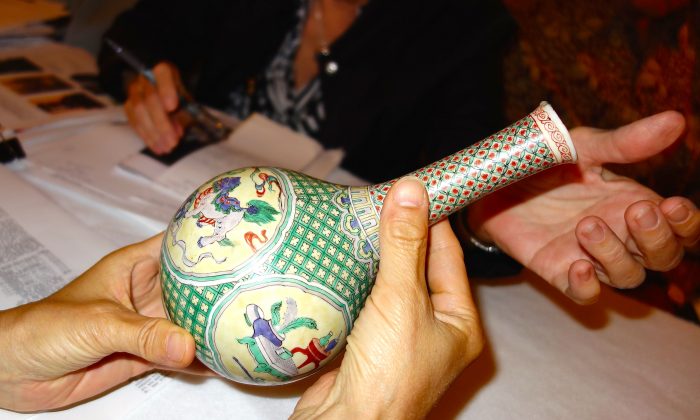 Chinese Treasures Hiding on the Hudson

TARRYTOWN, N.Y.—Do you remember Mr. Toad of Toad Hall from the 1908 children’s book “Wind in the Willows”? He was a bachelor member of the landed (amphibian) gentry who became obsessed with cars. He spent a fortune on them, drove them recklessly, and would listen to no reason. It ended in both tears and jail. And he nearly went bankrupt and forfeited his estate!

I wondered if John D. Rockefeller Jr. was trying to distance himself from his fictional peer Mr. Toad when he wrote this letter to his father, asking for a $1 million loan to buy Chinese ceramics:

“I have never squandered money on horses, yachts, automobiles or other foolish extravaganzas,” he wrote. “A fondness for these porcelains is my only hobby—the only thing on which I have cared to spend money.”

He added that he believed the collection would at least keep its monetary value, probably grow in value, and ultimately benefit the public good. “This hobby is quiet and unostentatious. I’m sure you would encourage so innocent and educative a project.” His father, John D. Rockefeller, founder of Standard Oil, was convinced, perhaps by that appeal to his Protestant sense of rectitude, according to Cynthia Altman. Innocent and educative made an irresistible combo.

Altman is curator of Kykuit, the six-story Rockefeller family home on a hill in Tarrytown, now a museum. A century later it is benefiting the public good just as Rockefeller predicted.

You may say what you like about that Gilded Age and this encore Gilded Age. One thing I like about ginormous accumulations of wealth is how they allow the arts to reach a peak. It’s your emperors and kings and your Medici and Rockefellers who provide a space for the ultimate manifestations of human creativity. If we were all yeoman farmers, or columnists, or insurance brokers, or maids, nobody would assemble treasures.

Kykuit (KY-cut, Dutch for lookout) holds artifacts from the glorious, 5,000-year-old Chinese culture. From the first dynasty, the Qin, to the last, the Qing, vases and statues and more are integrated into settings as lavish as the great estates of Europe.

Altman hosted “a small study group at Kykuit to look closely at selected objects in the collections of John D. Rockefeller Jr. and Nelson Rockefeller,” on Monday while the house was closed. Most of the people there were docents, already experts on the works.

They did seem potentially addictive.

We got to handle a vase, which Altman said is kept in storage. It sported a prancing Chi-lin, the fish-scaled dragon horse. He is one of the auspicious heavenly creatures in Chinese culture, a protector. The vase’s colors were satisfyingly balanced, representing the five elements of wood, water, metal, air, and fire.

Rockefeller and Rockefeller Jr., acted as protectors to all the irreplaceable treasures in their house. How many of them would have been smashed as the “Four Olds” if they had stayed at home? But these pieces of the nation’s heritage left the Middle Kingdom before its revolution.

A beautiful young Chinese lady was among the small study group. She helped us all by pronouncing the names of an emperor or two for us, and noting the character for emperor, wang, on a pair of ceramic figures, signifying that they were made for a king.

I am glad the royally wealthy John D. Rockefeller Jr., did not take the path of Mr. Toad. He could have indulged in motorcars, sedans, and roadsters, but instead he saved pieces of a priceless heritage, and now we can visit them and learn from them.