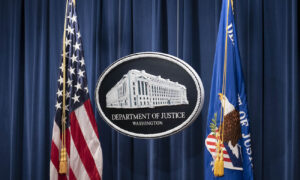 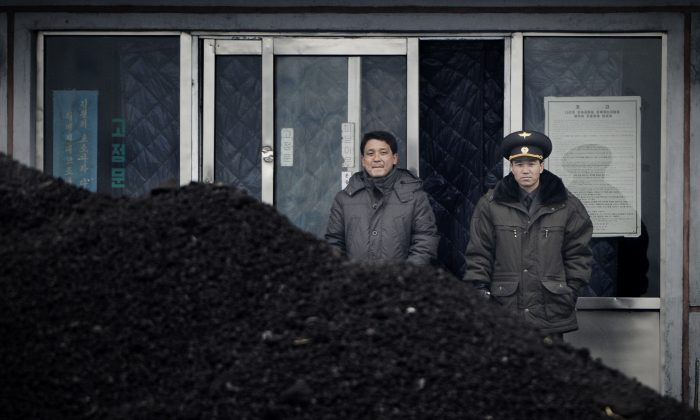 A North Korean military officer (R) and a North Korea man (L) standing behind a pile of coal along the banks of the Yalu River in the northeast of the North Korean border town of Siniuju, on December 14, 2012. On Feb. 18, the Chinese Commerce Ministry announced a suspension of all North Korean coal imports. (Wang Zhao/AFP/Getty Images)
China

North Korean exports to China fell by 13.2 percent in the first half of 2017, Chinese customs authorities said at a recent news conference.

The amount of goods going the other way increased by 29.1 percent, although Chinese customs officials stressed that these goods were not banned by the U.N. sanctions that are intended to force the communist regime in Pyongyang to give up its nuclear weapons program.

Recent months have seen the escalation of tensions, as North Korea has test-fired multiple ballistic missiles as part of its desire to gain a reliable method of nuclear weapons delivery,

U.S. President Donald Trump had previously criticized the Chinese regime in a July 5 tweet for not applying more pressure on North Korea to halt their nuclear weapons program.

“Trade between China and North Korea grew almost 40 percent in the first quarter. So much for China working with us — but we had to give it a try!” the president wrote.

In April, Trump and Chinese leader Xi Jinping had met at the Mar-a-Lago resort in Florida; the first face-to-face meeting between the two statesmen. According to Trump, they “made tremendous progress,” though no deals or breakthroughs were made.

Secretary of State Rex Tillerson stated that Xi had acknowledged that the situation involving North Korea had reached “a very serious stage”.

Since the meeting, however, Trump has both praised and criticized the lack of progress and action by China. He said on June 20 via Twitter that although he “greatly appreciate[s] the efforts of President Xi & China to help with North Korea, it has not worked out.”

Trade with China accounts for approximately 90 percent of North Korea’s total trade, and most of its food and energy supplies come from its neighbor to the north. China purchases iron ore, zinc, seafood, and clothing from North Korea, and had previously bought large quantities of coal before suspending imports in February. State-owned oil giant China National Petroleum Corporation also suspended fuel sales to North Korea in June.

Despite the Chinese efforts to reign in North Korea’s nuclear ambitions, real effects on Pyongyang have been few. North Korea’s latest missile test, on July 4th, suggests that the newly-developed Hwasong-14 missile could reach Alaska and parts of northwestern Canada.

The relationship between North Korea and China is complicated by their historical alliance and shared communist ideology.

Many Chinese officials profit from association with the Kim Jong Un regime, and differences in the two countries’ socioeconomic development and national interests notwithstanding, ties between the Chinese Communist Party and the Korean Workers Party ensure an otherwise unnatural closeness between Beijing and Pyongyang.