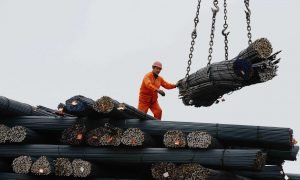 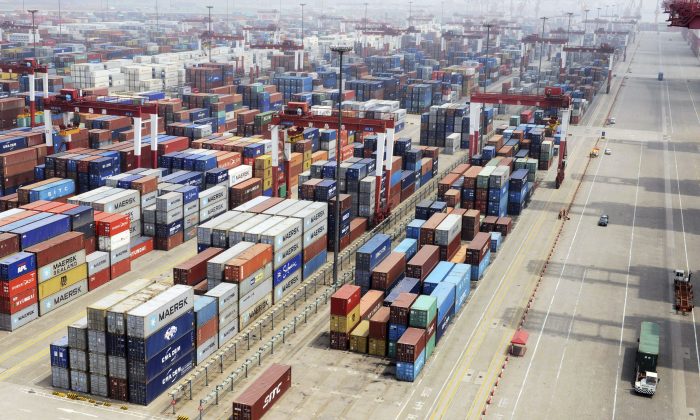 Containers are piled at a port in Qingdao in eastern China's Shandong Province on July 10, 2013. China reported Wednesday, July 10, 2013 that imports and exports both fell abruptly in June. The statistics are a new sign of weakness in the world's second-largest economy. (AP Photo)
Business

The Chinese central planners in Beijing already began to give up on 2013 a long time ago. They promised 7.5 percent growth for 2013, but even that relatively low number is coming under pressure. Exports, a key component of the Chinese economy, fell 3.1 percent in June, putting a big question mark behind the sustainability of Chinese growth.

“The export sector is faring very badly. It does suggest overall growth momentum is going to be weaker than we initially expected,” Société Générale economist Wei Yao told The Associated Press.

Analysts had expected a 3.7 percent gain over June 2012; instead the numbers were a massive disappointment. The June decline of 3.1 percent year over year is the worst figure since October 2009, a time when the Chinese economy was just emerging from recession.

However, it is not just this single month’s number but also the overall trend that is worrying.

During most of China’s rapid growth beginning in the early 1990s, exports were the key driver, enabling the country to invest in manufacturing capacity and providing jobs for hundreds of millions of people.

Following the 2008 financial crisis, however, growth in exports peaked in early 2010 and have been declining ever since. As a result, exports are no longer the growth engine of the Chinese economy.

A glimpse into the inner workings of the Chinese economy tells us why the gradual slowdown in export growth is so worrying.

Lacking innovation and productivity, China competes in the export market mainly on price and scale. Because of low wages, producing in China was very cheap through much of the 1990s. Likewise, an artificially undervalued currency made the products produced there cheaper and easy to sell on global markets. Also, China was attractive to foreign companies because they could produce any quantity—there was seemingly no upper limit on the size of an order.

Both China’s currency and wages have risen substantially since the middle of the last decade, however, providing one explanation for slowing exports.

In a frantic effort to counter this decline and avoid widespread unemployment, the Communist Party’s central planners shifted the focus from exports to domestic investment. Thus, investment as a share of GDP increased from 35.1 percent in 2000 to 48.4 percent in 2011.

This policy, however, was misguided according to investor Stanley Druckenmiller: “In essence, the frantic stimulus China put together at the end of 2008 sowed the seeds of slower growth in the future by crowding out more productive investments,” he told Goldman Sachs in an interview.

According to HSBC, the Chinese regime understands this problem. The analysts said it is trying to reduce excess investment without harming growth.

“While large-scale stimulus is off the table, Beijing’s policy makers have signaled that they will strike a balance between stabilizing growth and making structural adjustments. In his latest visit to Guangxi Province, Premier Li Kiqiang committed to ensuring the economy would operate within a reasonable range, avoiding GDP and employment growth sliding below the ‘bottom line’ (which we believe is around 7 percent),” the analysts wrote in a note to clients.

Balancing acts like these are hard to achieve and historical success stories are extremely rare. Druckenmiller doesn’t think this will be an exception: “I’m a believer in markets. A few men sitting around a table and deciding how to allocate capital goes against everything I’ve ever believed. Not only are they not great at capital allocation, such an exercise also needs to deal with a lack of property rights and corruption.”

This trend has some positive and negative implications for the world economy. For one, HSBC downgraded their target for world economic growth this year to 2 percent. Slowing demand for commodities from China—confirmed by slowing imports—has already resulted in lower commodity prices around the world. This is bad for raw material exporters such as Australia, Brazil, and Russia, but good for producing and consuming countries such as the United States and the European Union.

Another long-term plus for the world economy would be a more balanced trade equilibrium, not a one-sided model in which China produces and the United States consumes. The 5.4 percent drop in exports to the United States lowered the June trade deficit with China by $1.9 billion to $17.5 billion. It is a step in the right direction, but there is still a long way to go.

In the end, it remains to be seen whether Beijing can have its cake and eat it too and whether the global imbalances in favor of Chinese manufacturing will persist. In history, artificial imbalances in markets sometimes stayed for a long time before they inevitably reversed. The latest data coming out of China suggests this reversion has already started.