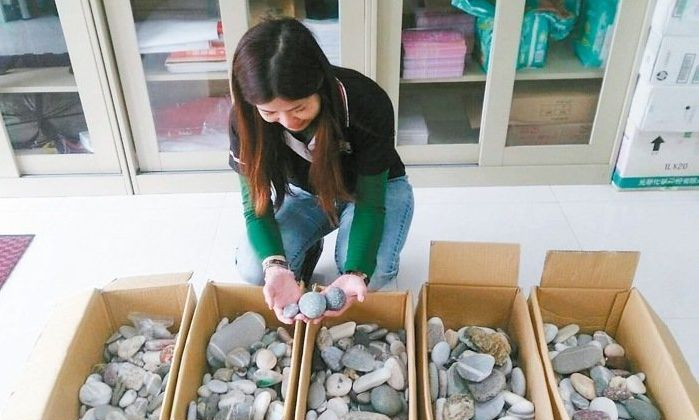 The rocks intercepted at the Taoyuan airport. (Sina Weibo)
China

Customs officers at the airport of Taoyuan, Taiwan, have seized over two hundred pounds from the luggage of mainland Chinese tourists who took the contraband from sightseeing locations on the eastern coast of Taiwan, the Central News Agency of Taiwan reported in late March.

The Sanxiantai and Bashian Caves are named for famous Daoist immortals and are closely associated with Chinese mysticism.

For many tourists, rocks found at these sites are endowed with auspicious qualities, prompting some to take them back home, despite the restrictions in place to prevent erosion.

Some of the tourists who took rocks seem repentant, however. On Feb. 22, Jao Jui-ling, deputy chief of the Environmental Protection Bureau of Hualien County, told the Central News Agency that she received a package containing three rocks and an apology written in simplified Chinese (the writing used in mainland China).