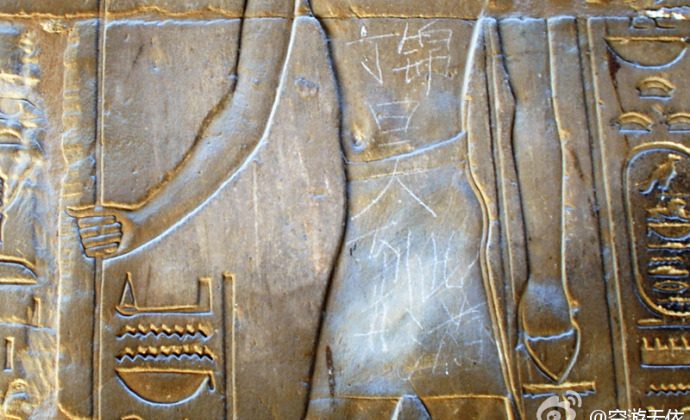 A photo of the vandalized ancient Egyptian temple, with the characters "Ding Jinhao was here." As a response to many embarrassing incidents involving Chinese tourists, China Central Television has started airing educational videos about how to be a polite tourist since August 14, 2013. (Sina Weibo)
China

For a week now the state mouthpiece China Central Television has been airing on its flagship news program educational videos about how to be a polite tourist.

“When you see empty seats on the airplane, everyone, whatever you do—don’t rush for those seats,” said Yin Delun, a tour guide for the Beijing Company of China Travel Service, in one of the etiquette videos.

This “unusual move,” as described by regime mouthpiece Xinhua News Agency, is part of the Communist Party’s efforts to combat the many embarrassing incidents involving Chinese tourists that have found their way into headlines and become the butt of jokes on social media.

In June, for example, 10 middle-aged tourists took to urinating on a wall of Beijing’s Summer Palace, despite being told by an onlooker about a nearby toilet a minute’s walk away. Also in June, a stranded, bleeding dolphin spent its last moments being photographed with Chinese tourists in Hainan Province, triggering one netizen to call them “worse than pigs.”

“When you’re in China, sometimes we’re a bit relaxed, we think it’s not a big deal,” said Jia Zhengfa, a tourist filmed in one of the CCTV videos. “But in other countries, it is—it’s a huge deal, and it affects China’s image.”

This isn’t the first time the regime has had to admonish Chinese tourists for poor behavior. In 2007, China’s Foreign Ministry posted a set of guidelines for citizens traveling abroad that advised them to refrain from shouting, fighting and even extortion.

Despite being the world’s most lavish spenders—spending $102 billion on overseas travels in 2012—Chinese tourists have often received a lukewarm reception.

Outside the Louvre Museum in France, a sign only in Chinese warns visitors not to defecate or urinate, according to a tour guide quoted by QQ, a Chinese news service.

The founder of French fashion retailer Zadig & Voltaire commented in October 2012 that its new boutique hotel opening in 2014 wouldn’t allow Chinese tourists, sparking outrage from many netizens. Thierry Gillier, who later clarified that he didn’t mean Chinese people specifically, stated that “there is a lot of demand in Paris—many people are looking for quiet with a certain privacy.”

Zhang Guangrui, a mainland tourism research center director in Beijing, sees the wave of poorly behaved Chinese tourists hitting other countries as a result of “different cultural habits and customs.” Zhang told regime mouthpiece Guangming Daily, “People who value different things and view life differently will naturally clash when they get together.”

Other explanations refer to the corrupting influence of China’s political culture and its destruction of traditional morality. Tourism research expert Yong Chen at the Hong Kong Polytechnic University says the phenomenon may stem from a history of turmoil in China, including the Cultural Revolution and the Great Leap Forward, two violent political campaigns launched by Mao Zedong.

According to Rushi News, a China news blog, Yong believes that middle-aged and older Chinese tourists behave rudely because they received little to no schooling and don’t understand other cultures.

On May 16 this year, Chinese Vice Premier Wang Yang further criticized Chinese tourists for harming the country’s reputation with their bad manners. He blamed their behavior on the “quality and breeding” of tourists.

Vice Premier Wang’s comments unfortunately did not stop the incident that occurred a few days later. On May 24, a photo of an ancient Egyptian temple defaced by a Chinese teenager with the carving, “Ding Jinhao was here” was posted by a Chinese traveler on Sina Weibo, China’s Twitter-like platform, along with the words, “The saddest moment in Egypt. I’m so embarrassed that I want to hide myself. I said to the Egyptian tour guide, ‘I’m really sorry.’”

Chinese netizens on Sina Weibo have commented extensively in the past about Chinese tourists’ lack of manners.

A netizen from the southwest Chongqing city wrote on Monday, “Hearing about such incidents really angers me. It’s ruining our reputations. How can we travel abroad in the future after such embarrassment?”

“Traveling reveals a person’s character,” said a netizen from Inner Mongolia, “When you behave rudely, don’t you think of how this reflects you as a person?”

A netizen from Jiangsu Province quipped, “From now on, Chinese citizens might have to sign a polite behavior contract before they leave the country.”

Research and translation by Ariel Tian and Lu Chen.