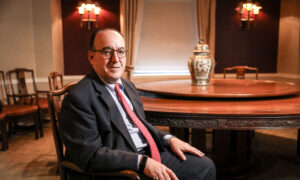 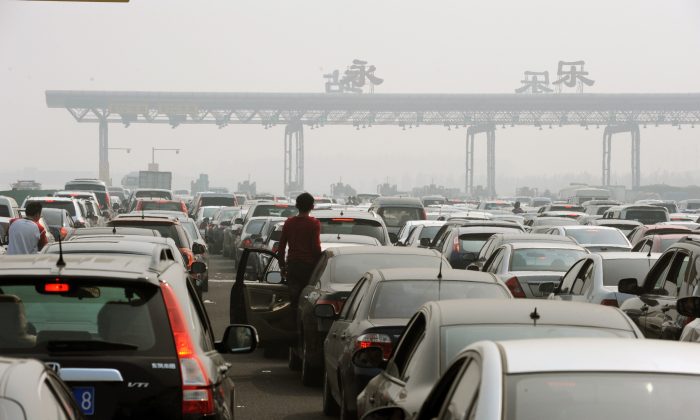 Chinese motorists get out of their cars to check on a massive traffic jam at a toll booth on the outskirts of Beijing on Oct. 2, 2010. In 2014 an estimated 400 billion yuan in tolling fees was paid by Chinese drivers, and many have questioned the legality of current toll policies. (STR/AFP/Getty Images)
China

Compared to the West, a lot of things in China are cheaper, but highway tolls are not on that list. This fact has not gone unnoticed. As ordinary Chinese complain about the exorbitant prices they pay to drive on their nation’s highways, fresh policies extending tolling timeframes are being passed across the country.

This year, it is estimated that Chinese drivers paid over 400 billion yuan ($65 billion) in highway tolls, a sum that businesses and local transport authorities claim is needed to pay off construction debts.

The truth about China’s highways, nicknamed “banknote printers” and “vampire straws” by irked netizens, is that they represent yet another path to instant and overwhelming profit for Chinese businessmen and government officials.

According to mainland Chinese media reports, 90 percent of China’s over 100,000 kilometers (62,000 miles) of highway is subject to tolling to cover construction expenses. Many roads, opened to traffic in the late 1990s and early 2000s, have either reached or are near the ends of their tolling periods. In the last two years alone, 16,000 km (10,000 miles) of road opened in the year 2000 should have stopped tolling, yet in multiple regions, from Shandong in the east to Xinjiang in the west, policymakers claiming the need to pay loans have teamed up to schedule extensions.

The Guang-Shen highway in southern China’s Guangdong Province is a typical example. Connecting the provincial capital of Guangzhou with the megalopolis of Shenzhen, its 122 kilometers comprise a major traffic artery and an enormous cash cow — a one-way ride comes with a 70 yuan ($11) toll. Opened in 1997, the Guang-Shen highway had by 2012 seen 40 billion yuan ($6.47 billion) of tolls collected, far eclipsing the 11.4 billion-yuan ($1.84 billion) investment loan taken out for its construction, according to figures released by Guangdong transport authorities.

Chinese highway tolls are some of the highest in the world, tolling much more per kilometer than is normal in developed nations. According to reports, “relevant departments” announced that the net national toll for 2010 was 280 billion yuan (about $45 billion). After this, no more annual statistics were released, but China’s Ministry of Transport later made public information stating that on various holidays in 2012 and 2013, Chinese drivers were spared 14.308 billion yuan in tolls. Extrapolation of this data, according to one mainland Chinese report, shows that at present the annual amount tolled is over 400 billion yuan.

Behind these exorbitant sums lie massive economic profits. According to this year’s annual reports of a highway development firm in Guangdong Province, it saw 26 percent profits in the first half of the year. From the report can also be seen that multiple other such firms across China made over 30 percent profits. This kind of success tops even that of the finance and real estate markets, Chinese media noted.

These figures, and similar statistics for other regions in China have provoked appeals for transparency regarding the process and structure of investments, loans, and ownership of highway projects. Chinese highways are legally considered public infrastructure investments, and their use by local administrations and firms for profit has invited public scrutiny. Despite years of attention, however, little if any improvement has been made.

Even after China’s central government passed legislation clarifying the public, non-profit nature of highway infrastructure, local administrators have continued to exploit loopholes. A national regulation implemented in November 2004 stipulates that tolls shall not be charged on highways for more than 15 years to pay off government loans. In a press statement, a spokesman from the Ministry of Transportation said that “tolls should end when the period expires” and that highways should “strictly follow” the regulations.

A commonly-used regulation stipulates that “no highway, regardless of its individual loan repayment status, shall reduce or end tolling until all outstanding loans for highways in the same province are repaid.” In Shandong Province, official data revealed that the toll collected in 2013 was spent primarily on loans and road maintenance; however, not only did this sum pay for interest on highways, but for local and rural roads as well, which should have been covered by other means.

An official audit of highways in 18 Chinese provinces revealed multiple instances of idle funds and misappropriation. Funds were found to have either been hoarded or reinvested in stocks or the construction of hotels and offices. Another means of misappropriation is staff payment. The highway industry is overstaffed and workers enjoy unreasonably high welfare. One company was revealed to have hired 156 staff despite preparing only 27 positions.