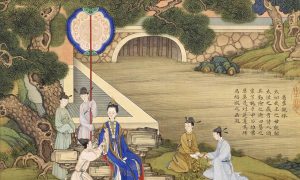 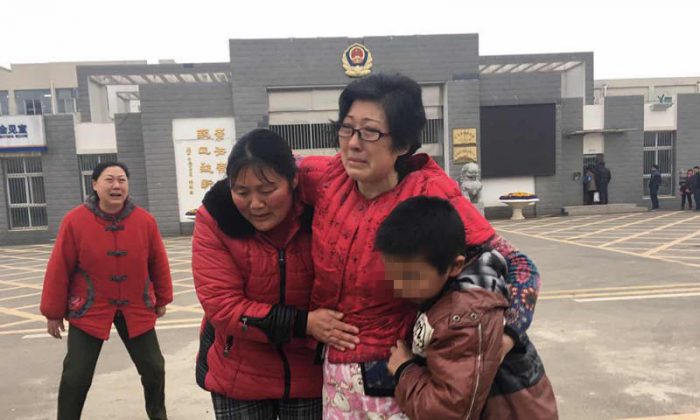 After serving her 6-month prison term for ferociously hitting her adopted son, an infamous “tiger mom” in China walks free, but not away from further controversy.

Li Zhengqin was found guilty of assaulting Shi, her legally adopted 10-year-old son, in September last year. Her brutality was exposed after Shi’s school teacher posted images of the horrific bruises on his hands, feet and back on the Internet.

Li said she beat her adopted son over unfinished homework and for lying to her. Ms. Zhang, the boy’s biological mother and cousin of Li Zhengqin, had sent him away from their village in Anhui Province to Nanjing City (about a 3 hour train ride away) in hopes that he could receive a better education in the city. Thus, Shi came under the foster care of Li in 2012 at the age of 7.

Outside the Changzhou’s Women’s Prison in Jiangsu Province on Mar. 13, ‘tiger mom’ Li Zhengqin was greeted by a tearful Ms. Zhang, the boy’s mother, who got on her knee and said: “Cousin, it is me who has made you suffer,” reported Beijing Times. The boy also ran up to Li and gave her a hug.

“My baby, mommy is home,” said a tearful Li while holding Shi in an embrace.

According to the Beijing Times, Li said that during her time in prison she had twisted her waist after being made to stitch marks showing where the buttons would go on clothes. Everyday, Li was required to finish 2,000 pieces of clothing and work for over 10 hours.

Li said she had lost about 55 pounds, and felt uncomfortable being locked up with drug users and thieves. She recalled a particularly humiliating incident on Dec. 10 when a fellow inmate cut her hair short while verbally abusing her; Li said she cried afterwards.

Chinese Internet users on the popular Sina Weibo microblog, however, were displeased that Li had only complained about her incarceration without issuing a substantive mea culpa for abusing her adoptive son.

“You didn’t utter a single word admitting to your guilt but instead complained about how bitter and tired you were in prison; where did you find the strength when torturing your kid?” wrote a netizen with the name “Yun_cyan” from Nanjing in a Weibo post with over 8,000 likes.

“You are yourself a criminal, and yet you feel wronged?” asked a Henan netizen going by the name “Cong Zehui” in a post with more than 10,900 likes.

Another post with over 10,000 likes came from a Guangdong netizen: “You only want people to sympathize with you. But back then your treatment of the child was vicious. And you are still fat after losing 25 kilograms.”

“You, a child abuser, despise thieves and drug users. When did child abusers become morally superior people,” wrote a netizen with the moniker “Shanxi 660” from Beijing, yet another popular Weibo post.

During her trial last year, Li Zhengqin tried to present herself as a loving foster mother. She showed the judge 50 pictures of a mostly beaming Shi at different life moments—1st grade of elementary school, eating, making funny faces, trips to zoo and the sea, doing homework corrections, as well as losing his milk teeth—including the photos of his badly bruised back and arms, reported Sina, a popular Chinese news portal, last September.

In an interview with Legal Daily days before Li was released, Ms. Zhang, the boy’s biological mother, said that her son had been performing well in school up until the beating incident. After that, he was forced to skip school for 20 days during the legal proceedings, and couldn’t keep up with his lessons after returning to class.

Ms. Zhang says she’s not able to properly tutor her son. “I am not educated. I cannot teach the kid. I can only make sure he does his homework, but I don’t know if he has done it correctly or not.”