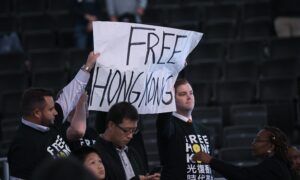 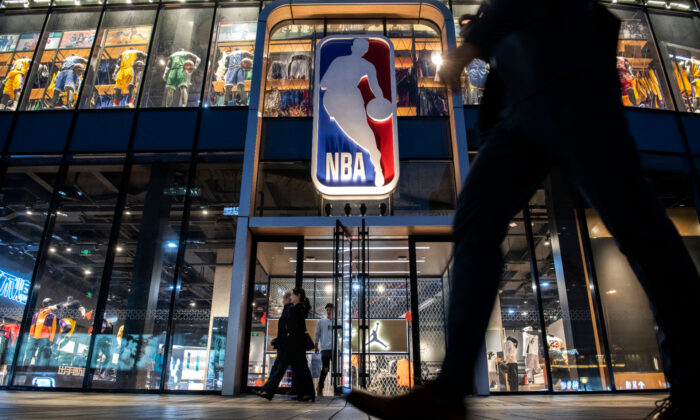 Tencent, on the morning of Oct. 14, streamed two games: one between the Toronto Raptors and Chicago Bulls in Toronto, and another between Israel’s Maccabi Haifa and Minnesota Timberwolves in Minneapolis.

Just a week ago, the tech giant suspended broadcast of Houston Rockets’ games after the team’s general executive, Daryl Morey, expressed support for the Hong Kong pro-democracy movement in a tweet that was swiftly deleted.

The tweet ignited an uproar in China, where the ongoing protests are seen as a direct challenge to the mainland regime’s sovereignty. Houston Rockets’ and NBA’s Chinese business partners cut ties as a result, while the team’s sneakers and other merchandise were pulled from several Nike and NBA stores in major Chinese cities.

The internet giant has the exclusive rights to stream the NBA in China, and is the league’s largest digital partner outside the United States. The two had just signed a deal worth $1.5 billion in July, extending their partnership for another five years.

The current broadcast schedule on Tencent showed that all live-streaming of NBA games will resume on Oct. 23. Houston Rockets games weren’t on the schedule list.

About 490 million people watched last season’s NBA games on the Tencent platform, according to the NBA.

When asked about the resumption of NBA streaming on Tencent, a foreign ministry spokesperson said at a press conference on Oct. 14 that they “generally do not comment on the business behaviors of companies,” but stressed that “sports exchange has played a positive role in China–U.S. relations and friendship.”

Tencent was blasted on China’s popular microblogging site Weibo for resuming streaming, with many nationalistic Chinese netizens decrying the move as an act of “betrayal.”

“Seems like the patriotism is short-lived,” a user wrote.

The move came amid efforts by the Chinese regime to reign in the crisis over concerns that its heated reaction against the NBA could harm its image abroad, The New York Times reported.

Meanwhile, in the United States, the NBA faced mounting condemnation over its initial disavowal of Morey’s tweet. NBA Commissioner Adam Silver later defended Morey’s right to express his views on Hong Kong, adding that it isn’t up to the league to regulate what players, employees, and team owners say.

Ten bipartisan U.S. lawmakers wrote to Silver on Oct. 10 expressing concern over the NBA “equivocating” on free speech during the saga. They also urged the league to suspend its activities in China while the Chinese boycotts against the NBA and the Houston Rockets are still in place.

Meanwhile, U.S. video game company Blizzard Entertainment, partially owned by Tencent, which last week also drew criticism over suspending a player for comments in support of the protests, announced it was reducing the gamer’s sanction.

In response, Blizzard banned Ng from the competition for a year and stripped him of his prize money, a move that triggered a boycott from players and employees.

Blizzard, in a statement on Oct. 12, said after reconsideration, it determined a six-month suspension was more appropriate, adding that “encouraging everybody to share their point of view” is part of the company’s core values.

“In the tournament itself blitzchung *played* fair. We now believe he should receive his prizing,” it said.

Mark Kern, a prominent former Blizzard employee and ex-World of Warcraft designer, said the decision was designed to placate the Chinese regime.

“This wasn’t for us, the gamers. There was no apology, no remorse, no sense that Blizzard did anything wrong,” said Kern, who joined the Blizzard boycott in support of Blitzchung.

“This was written to keep US senators off their backs and to keep China happy,” he added.