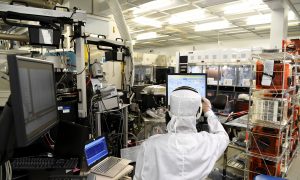 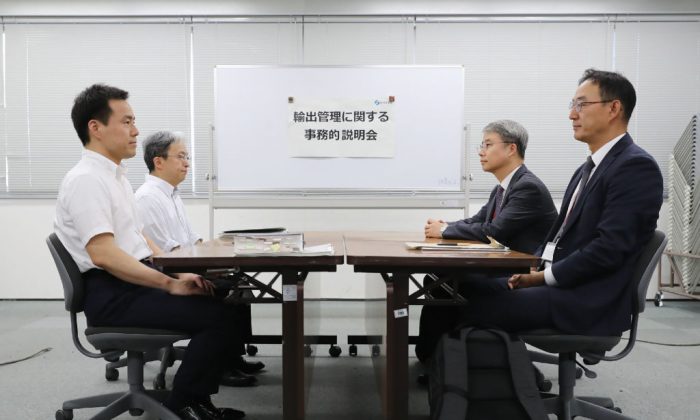 The export restrictions, announced July 4, are for three materials—photoresists, hydrogen fluoride, and fluorinated polyimides—which are key in the manufacture of electronic chips. Those chips are the bulk of what South Korea’s tech sector—dominated by chip and display makers such as Samsung Electronics and LG Electronics—produces.

Japanese companies are now required to apply for individual licenses, which could take about 90 days, to export those materials to South Korea, according to Japanese media.

Photoresists are used to transfer circuit patterns onto semiconductor substrates, which eventually become chips that power everything from computers and smartphones to ballistic missiles.

Hydrogen fluoride is a highly corrosive acid that is used as an etching solution to clean semiconductor substrates, a vital step before the process of making semiconductors can begin.

Fluorinated polyimide is used to make flexible displays, such as those on smartphones.

South Korea purchased $103.52 million of photoresists, $28.44 million of hydrogen fluoride, and $12.14 million of fluorinated polyimides from Japan in the first five months of 2019, according to Reuters.

If South Korean tech firms halt production, due to a shortage of these materials, China’s tech sector would subsequently be hurt, due to its dependence on South Korean tech imports. According to a July 15 article by Japanese media Nikkei, China especially relies on South Korean DRAM memory chips, with 48 percent of its DRAM needs supplied by South Korea.

Japan’s decision to slap export restrictions on South Korea is widely seen as retaliation for recent South Korean court rulings. Japanese companies were ordered by a court to provide compensation to South Koreans who were forced to labor for them during World War II. At the time, the Japanese occupied the Korean Peninsula.

Japan has maintained that the forced labor issue was settled in a 1965 accord, in which Japan provided a monetary settlement and the two nations restored diplomatic ties.

Hydrogen fluoride also is an ingredient in making chemical weapons.

DRAM memory chips are a key component in most electronic gadgets, including smartphones and computers.

According to data from DRAMeXchange, a division of Taiwan-based market researcher TrendForce, Samsung sold $43.75 billion worth of DRAM chips globally in 2018, making it the global leader with a market share of 43.9 percent. SK Hynix was second with sales of $29.41 billion, or a market share of 29.5 percent, followed by Micron with a 22.1 percent market share.

If South Korean DRAM makers were to cut production due to Japanese export restrictions, Chinese tech firms could turn to Micron for DRAM imports. However, Japanese media have pointed out that any tech reliance on U.S. firms is risky, given the ongoing U.S.-China trade war.

A cutback in South Korean DRAM production would not only hurt Chinese tech companies, such as Huawei, but would also affect U.S. tech giant Apple and Japanese firms Sony and Panasonic, according to Nikkei.

Nikkei estimated that South Korean DRAM makers have enough memory chips in stock for about a month of sales, after which supplies could run out.

Chinese authorities have indirectly admitted to the potential negative side effect. China’s Center for Information Industry Development (CCID), the research arm of China’s Ministry of Industry and Information Technology, said in a July 10 analysis article that if Tokyo were to impose restrictions on exports to China, such as materials and equipment needed for the manufacturing of display panels, Chinese tech firms would suffer major losses—much worse than their current South Korean counterparts—as Chinese companies rely heavily on Japanese suppliers.