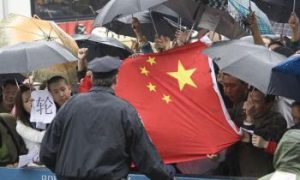 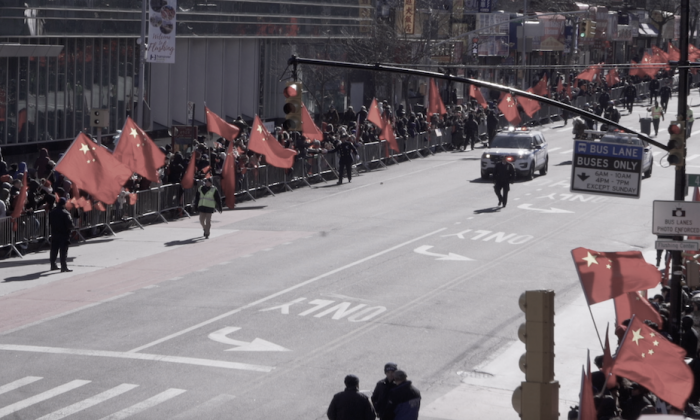 Agents of the Chinese Communist Party (CCP) keep a watchful eye on ethnic neighborhoods and actively harass and pressure anyone who dares step out of line on CCP policy—even on U.S. soil.

These operations are carried out on a large scale by CCP agents living abroad, under the regime’s United Front Department. The agency works through Chinese consulates, which, in turn, recruit and operate through hometown and fraternal organizations abroad, known as Tongs, which often have thousands or tens of thousands of members.

In New York City, CCP United Front operations have been on full display in Flushing, a Chinese neighborhood in Queens. There, Chinese agents and individuals with exposed ties to the CCP have taken part in a campaign of violence, intimidation, and harassment since 2008—mainly targeted at people who practice the persecuted Chinese meditation practice of Falun Gong.

During the annual Lunar New Year parade in Flushing on Feb. 9, more than 100 large red flags of the CCP were seen lining the main street of the parade route. The individuals who held the flags were evenly spaced, standing roughly six feet apart.

The protests were staged, and several of the participants said, in undercover video footage taken by The Epoch Times and NTD Television, that they had received money from the CCP agitators. There also was footage showing how the scene was orchestrated by CCP-tied groups, with individuals apparently acting as coordinators, handing out the flags.

Among the groups behind the distribution of the flags was the infamous Chinese Anti-Cult World Alliance (CACWA), which has ties to the CCP and to serious human-rights abuses in China. The CACWA is banned from participating in the Flushing Lunar New Year parade for violating parade rules in the past about displaying CCP flags. The organization also had put up banners with anti-Falun Gong hate speech.

Falun Gong is a meditation practice that originated in China and is based on the principles of truthfulness, compassion, and tolerance. Practitioners often meditate in the mornings and make efforts to refine their character in their daily lives. The practice was banned in China in 1999, however, after the CCP found there were as many as 100 million adherents.

A brutal persecution followed, which has included torture, false imprisonment, re-education through labor, killings, and organ harvesting from living people. To cover up and justify the persecution in the minds of Chinese people and the world, the CCP has used a large-scale program of censorship, disinformation, and threats of violence abroad.

Among the many organizations the CCP has used in the persecution is the Chinese Anti-Cult Association, which works with the CCP’s extrajudicial force for persecuting Falun Gong, the 610 Office. The Gestapo-like 610 Office was created to monitor, arrest, torture, and “transform” people in China who practiced Falun Gong, forcing them to renounce their beliefs.

In China, the Chinese Anti-Cult Association works with the 610 Office by advising it on methods of persecuting Falun Gong practitioners and turning the Chinese people against them. The CACWA in Flushing shares the organization’s name, uses the same materials, and carries out similar operations.

The organization in Flushing also has direct ties to one of the CCP’s main arms for subversion: the United Front Department.

Among the longtime agitators active during the recent incident in Flushing was Li Huahong, head of the CACWA, who instructed flag-bearers to unfurl their flags and ordered them to stand in assigned areas.

Interviews showed that many who participated weren’t officially part of the CACWA, but instead took part simply for the money. Undercover video footage shows a paid Chinese protester saying he received $20. Another, an African-American man, told a reporter he was paid $20 to carry a flag. An apparent organizer also was seen telling participants to keep their money safe, adding that the payments were $30 each.

A middle-aged man instructed participants to lie about the money they received, stating, “If people ask you whether you get money [for holding the flags], tell them there’s no money.”

Key organizers with the CACWA were exposed by The Epoch Times in previous reporting to have direct ties to CCP spy agencies for United Front operations.

The CCP groups have been especially brazen in their activities in Flushing, New York, where, in 2008, they gathered in large groups in broad daylight, and physically assaulted local residents who practiced Falun Gong.

Reporting from The Epoch Times revealed involvement at the time by then-Chinese consulate general Peng Keyu; by numerous Tongs, including the Fukien American Association, which has close ties to the CCP and to organized crime through the Fuk Ching gang; and by individuals directly affiliated with the United Front Department.

High-level sources inside China told The Epoch Times in 2008 that the Chinese community in New York was used as a testing ground by the CCP for tactics to extend its persecution against Falun Gong abroad. The attacks in New York were followed by similar organized attacks against Falun Gong practitioners in San Francisco, Paris, Hong Kong, and elsewhere.

Epoch Times staff member Cathy He and NTD Television contributed to this report.