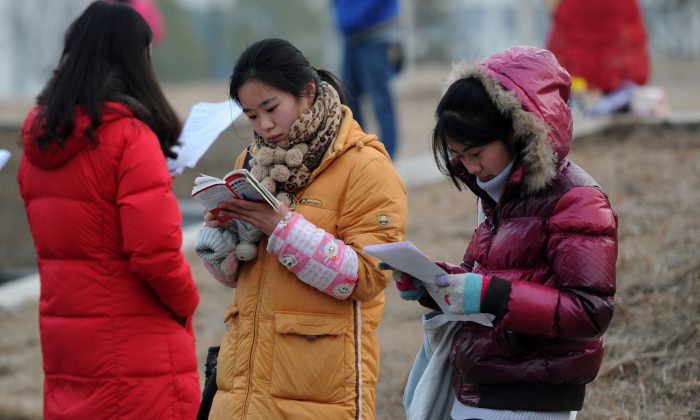 Students go over their notes before taking exams in Hefei on Jan. 5, 2013. Over one hundred female college students from across China jointly raised awareness of sexual assaults against young girls on school campuses during the National People's Congress in March of 2014. (STR/AFP/Getty Images)
China

During the convening of the communist Party’s annual National People’s Congress earlier this month, over one hundred female college students from across China jointly send emails to 105 deputies from around the country, asking them to pressure the Ministry of Education to establish a mechanism for preventing sexual assault on campuses.

According to a press release issued by China’s non-governmental organization Yirenping, eight deputies responded to the students’ calls, and promised to “relay their concerns and give suggestions to related organizations.”

The joint appeal by 102 female college students from Henan, Yunnan, Hubei, Guangdong, Sichuan Provinces and Chongqing was not about assaults against university students. It primarily focused on sexual assault cases against middle school and elementary school students. These young girls have been subjected to sexual abuse and suffer more harm, and the consequences are more serious. It is therefore a greater priority to pay attention to this problem, the students said.

Liang Xiaowen, a student from South China University of Technology and one of the appellants, said that last year Chinese media reported 112 cases of sexual abuse of young children. In 31 of the cases the perpetrators were teachers or employees of the child’s school. The Ministry of Education should be clear that kindergartens and schools are responsible for campus security, Liang said. Dereliction of this duty and improper acts should be subject to correction and punishment, she added.

Despite the fact that China has laws to punish crimes of sexual violence against minors, the problem is not being addressed, according to Liang. It is crucial for the education sector to be proactive in helping to prevent on-campus sexual assault of youngsters, she said.

Miao Jie, a volunteer for Yirenping said that raising the issue with the current People’s Congress is timely.

“Last year, the first exposed case was a child molestation scandal in Hainan Province where a headmaster took six girls to a hotel room. Then in Nanyang, Henan Province, a teacher sexually assaulted a female student. Subsequently, many such incidents were exposed. This issue surely is a serious and common occurrence,” Miao said.

Civil rights activist Lu Jun said he is not optimistic about the role or effectiveness of China’s Peoples Congress, but he is encouraged by the increasingly active involvement of Chinese college students in community affairs in recent years.

“Even though everyone says the Two Sessions are merely an embroidery, a vase, or a rubber stamp, it is also a time when the media pays a relatively greater amount of attention,” Lu said. “I think those female college students have picked the right time for their advocacy activities, and this is a very smart move. ”

Lu said the fundamental issue behind the sexual assault crimes against girls is that there isn’t a fair and effective mechanism of punishment and deterrence. “Officials can escape punishment, the rich can afford to take care of it with money. This phenomenon cannot be contained and controlled. If we were to emphasize self-protection of young girls, it would not amount to anything.”

Lu added that as long as more and more Chinese citizens become aware of the existence of social problems and have the courage to get involved, there is hope for China’s future. Young people, including college students, need to take on more responsibility in this regard, he said.

Translation by Fenny Li. Written in English by Christine Ford and Gisela Sommer.