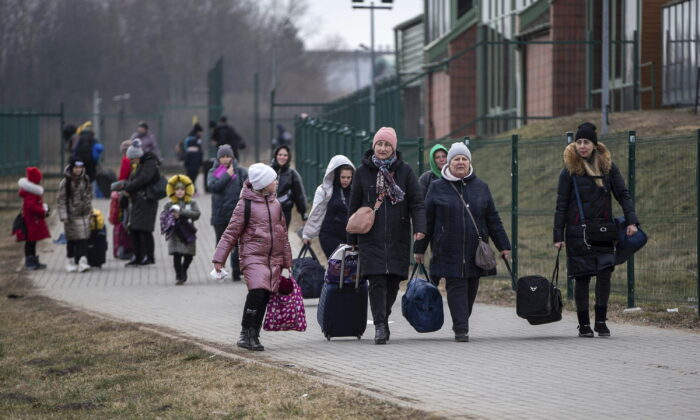 Amid the Russia-Ukraine war, the Chinese Communist Party’s (CCP) embassy in Ukraine announced on March 8 that all Chinese nationals had been evacuated from the dangerous areas in Ukraine. But a Chinese student trapped in Glukhov, along with three others, told The Epoch Times about his failed attempt to escape from the war zone with no help from the regime.

Lin Yunfei told Chinese edition of The Epoch Times, “My heart sank, when I saw the report. There were originally 119 people in Sumy and now 115 of them have been evacuated but there are still 4 people here. We also belong to Sumy Oblast. Four of us were left behind.”

Glukhov is located in northeastern Ukraine, close to the Russian border. On Feb. 24, the first day of Russia’s invasion of Ukraine, the battle broke out at Glukhov.

“The embassy said that there were too few of us over here, and they couldn’t do anything [to help]. They told us to come over by ourselves and find our own way,” he said. What could we do? We did get a car but it wasn’t allowed through. We would have to walk 150 kilometers (93 miles). “Every day we are very anxious.”

Lin said that the local air defense alarm started on Feb. 24, and the larger supermarket nearby was already all sold out.

Although they wanted to evacuate at the time, they didn’t have a car and couldn’t leave. So he contacted the Chinese embassy in Ukraine for help.

Lin said: “I called the the embassy. They told me to fill out a form to register [for evacuation]. We thought that the embassy would come and pick us up, so we didn’t leave on our own at that time. As a result, we were left out of the last trip. ”

On March 8, he attempted to hitch a ride to the evacuation point by himself. He said: “We passed the first checkpoint. When we reached the second checkpoint, we were blocked by the militia and they told us it was dangerous ahead.” They had to turn back.

Lin is also worried about food. He said: “On Feb. 25 or 26, there were no more supplies, and there was less and less food in the supermarket. Now [everything] is gone. We go to a nearby market early every day, but it won’t last long. I have only a bag of rice, a bottle of oil, and two loaves of bread.

“It is more difficult to find food, there are no vegetables. Ukrainians give us bread every day, and they often call us to have a meal with them during the day.”

The Chinese students who had been evacuated from Ukraine to Poland revealed on Chinese social media Weibo that they were charged 18,000 RMB ($2,850) per ticket for the flight back to China on March 10. Furthermore, they were required to rehearse and sing the Chinese communist propaganda song “Me and My Motherland” at the airport collectively when they were leaving.

Zhao Fenghua and Gu Xiaohua contributed to the report.