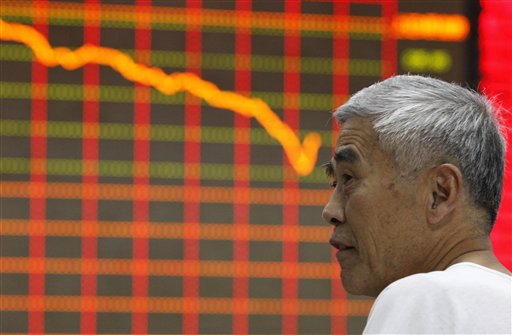 The all-time-high of 5903 was reached in October 2007. Since then, the benchmark Shanghai Composite index has been in decline, despite a brief ramp-up to 3412 in 2009, following massive government stimulus. Now, the Chinese stock market gauge is about to hit rock-bottom again.

Chinese stocks dropped 5.3 percent on Monday, June 25, 2013, the largest drop in four years. Stocks extended their slide on Tuesday, rapidly approaching the secular low made during the 2008 crisis at 1728.

However, a rumor that the central bank might intervene saved the day and pulled stocks back from 1852 to 1959, a 5.8 percent reversal in a few short hours. Nonetheless, the index is down 20 percent since a recent peak in February, marking it an official bear market.

The real trouble started at the end of May when reports emerged that the Industrial and Commercial Bank of China did not repay an interbank loan.

Since then, short term lending rates in the interbank market spiked to record highs, not unlike the explosion of LIBOR seen in the West around the time of the Lehman crisis. On June 20, 2013, another report emerged that the People’s Bank of China (PBOC) had to intervene.

On Monday, June 25, 2013, Caijing reported the Bank of China suspended all transfers to and from futures trading accounts. Although the problem was likely software related and services resumed later that day, another report like that was too much for jittery investors who sent stocks sliding.

The slide would have continued unabated, safe for the rumor that the PBOC would intervene by injecting liquidity across the market. Later the PBOC announced that liquidity was “ample” and said the recent squeeze was due to “seasonal factors,” according to Bloomberg.

It is precisely this hands-off attitude by the PBOC that has surprised and scared investors, who until know could always count on the PBOC injecting liquidity into the system. A recent editorial in the Chinese regime’s mouthpiece China Daily suggests that this policy is set to continue.

“It is still too early to conclude that the monetary authorities will sit idle as the money market becomes tight and the stock market becomes more bearish. But policymakers have brought home the message that the past mode of economic growth driven by credit-based investment should no longer continue,” says the editorial.

The Chinese regime over the past years has talked about structural reforms to change the way the economy grows, away from investment to consumption. So far, little action has followed suit and the PBOC stance of reducing cheap money for investment projects might be the beginning.

“The high price of housing, the growing local government debts, the sluggish private sector and, most recently, the tight money conditions of banks, all point to the risks of an overstretched economy if we do not accelerate the overdue structural reforms,” says China Daily, which is often used to communicate policy by the Chinese regime.

Dr. Frank Tian Xie, a business professor at the University of South Carolina Aiken comes to the same conclusion: ” If the current administration continues the trend of reckless lending as before, the real estate bubble and inflation will become a much larger headache; it’s just the time of the burst is delayed, but the bubble will inevitably become bigger. “