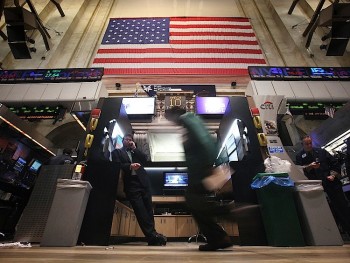 Traders work on the floor of the New York Stock Exchange in early 2011. In the beginning of June, short seller Muddy Waters Research released a report that dramatically reduced the value of Sino-Forest stock. This was just the first of several Chinese companies being assessed by Muddy Waters. (Mario Tama/Getty Images)
Business & Economy

In the beginning of June, short seller Muddy Waters Research released a report that reduced the value of Sino-Forest stocks to a sliver of their May prices. The ripples were felt by other Chinese companies listed in North American stock markets, many of which saw their stock values drop.

That report came a day after A-Power Energy Generation Systems Ltd. announced in a news release that its auditor, MCSM, had resigned. MCSM said it quit A-Power because the company did not retain a “qualified independent forensic accounting firm” that would evaluate certain business transactions so that MCSM could complete the audit.

Back in April, Duoyuan Printing Inc. was delisted from the New York Stock Exchange after the company failed to file its financial reports. Other companies that have had their stock trades halted include China-Biotics Inc. and Yuhe International Inc.

These incidents have raised questions about foreign-listed Chinese stocks, Chinese business practices, and the risks associated with investing in Chinese companies.

Chinese Stocks and the West

Chinese companies have been listing in North America for around 20 years, said Cao An, a Chinese economist living in the United States.

But an upsurge in listings began in the last three to five years, he said. And the growing number of fraud allegations is more recent yet.

“Chinese companies looking to get into North American [stock] markets generally have two paths,” he said. “Of course, they can submit a formal application. But they can also do a reverse merger.”

In a reverse merger, a private company buys a public shell company that is no longer operating but is listed on an exchange. The private company then sells its shares on the exchange largely through the approvals granted to that previously listed company.

It is relatively easier and faster to undergo a reverse merger than go through a formal application to be listed, as the process is subject to less scrutiny.

“The problem can be in many areas,” he said, and includes dishonest accounting statements, fraudulent tax forms, and the overstating of revenues and assets.

Business conventions are not the same in China and North America he said. “Here [in North America], people value trust, and it’s important to be trusted.”

But in China, the basis of business is often fraud. Chinese companies “approach overseas stock markets with a Chinese perspective,” causing them to keep practicing fraud, he alleged.

Clive Ansley, a Canadian lawyer who practiced in China and now advises his clients on business with China, said the model of trust in the west may prove a liability when dealing with Chinese companies.

“There’s a tendency … to just accept at face value the statements that are made by the company,” he said.

Business in China without legal protection

With many Chinese companies accustomed to fraudulent practices—including forging documents and falsifying financial statements—rampant in China, those practices are starting to be uncovered in North America.

Ansley said Canadian laws are “far too lax,” though the situation is even worse in China.

“There’s no transparency at all [in China],” Ansley said.

Cao An said that Chinese regulations don’t warn companies about breaking laws or punish them when they do. U.S. Regulations are very strict in comparison.

And while business laws do exist in China, they are rarely enforced. Ansley, who represented foreign firms operating in China, says Chinese courts offer no legal protection to foreign businesses.

“If you go into a court and argue the law, they don’t even want to look it up to see what the law says,” Ansley said. Reasonable looking laws have fooled western businessmen and politicians, who do not realize they only exist on paper, he said.

“All the courts and all of the judges without exception are controlled directly by the Chinese Communist Party,” he said.

The system makes it impossible for foreign parties to win because the judiciary is not independent and knows to side with domestic companies, said Ansley.

“The picture that’s been sold is that China has gone private. In practice, the [Chinese] government is heavily involved.”

Since the Chinese Communist Party controls many of these companies, it may decide to keep one firm and shut down the competing firms, Ansley said. That could help or hurt investors depending which firm they have invested in, but the uncertainty makes Ansley advise clients not to touch Chinese stocks “with a ten-foot pole.”