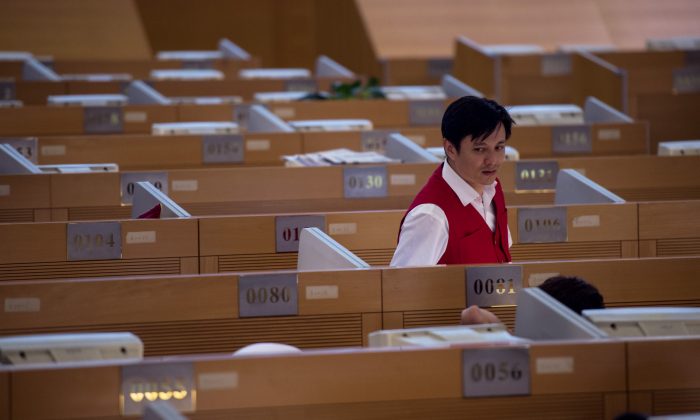 A man works on the trading floor at the Shanghai Stock Exchange on September 22, 2015. (JOHANNES EISELE/AFP/Getty Images)
Business & Economy

Chinese Stocks Crash, Why Is Anybody Surprised?

Western commentators complain that China’s 7 percent stock crash on Jan.4 is a dreadful start to the new year.

Well, technically speaking, the Chinese still can hope their new year is going to be better than the old one, since Chinese New Year isn’t until February 8.

Until then, it looks like it’s going to be downhill for the economy, stocks, and the yuan.

The Shanghai composite slipped 6.9 percent to 3296 on Jan. 4, triggering circuit breakers. The onshore yuan dropped 0.37 percent against the dollar.

Official GDP numbers come out on Jan. 19, but whatever the official number, real growth won’t be good judging from data on the ground.

In fact, if you look at any data coming out of China, whether it’s official or unofficial, all of it is pointing south.

The currency will devalue further against the dollar because it has actually gotten stronger in trade weighted terms in 2015 and that’s what China cares about.

This is the only reason why China launched a trade weighted index for the yuan, so it has a justification to devalue further against the dollar.

Official GDP growth slowed to 6.9 percent in the third quarter of 2015, but Capital Economic’s own activity proxy indicates growth of only 4 percent.

Electricity consumption, one of the best economic indicators, is not growing at all.

Retail sales are still growing at 10 percent, but retail is not a large share of the economy and growth fell from a peak of almost 20 percent right after the financial crisis.

Trade has collapsed, firmly trending down.

Producer and commodity prices are deep in deflationary territory. Capital Economics is optimistic this will change soon though.

Credit is still growing, but also trending down. Also, the ratio of output per unit of credit decreased dramatically over the years.

Knowing all this, how can traders be surprised by weak manufacturing data? Hope dies last.