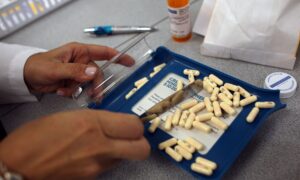 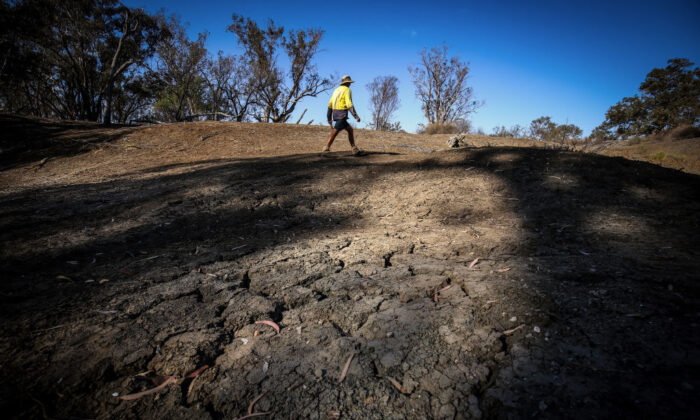 A farmer walks near the shells of dead mussels lying in the dried-up bed of the Namoi River near the north-western New South Wales town of Walgett on Oct. 6, 2019. (David Gray/Getty Images)
Australia

On May 6, ABC’s 730 program revealed that state-owned Chinese enterprises now own water entitlements in Australia. One of them is Unibale, an Australian subsidiary of state-owned COFCO Group (China Oil and Foodstuffs Corporation), China’s largest food processor, manufacturer, and trader.

The investigation by 730 found that Chinese investors collectively own 732 gigaliters of water, more Australian water than Sydney Harbour holds, or 1.9 percent of the water on the market. Unibale has acquired more than 7,000 megaliters of water entitlements in the northern end of the Murray-Darling Basin in New South Wales (NSW).

Free Trade Not Reciprocated by China

The Australian water market is split into different sections within each state, and the largest one is the Murray-Darling Basin in the south-east.

Foreign investment in the water supply of the Murray-Darling Basin started to surge after the easing of basin trading rules in 2014 and has been a divisive issue.

The first registration report published by the Australian Tax Office (ATO) in 2018 shows that one in 10 water entitlements is foreign-owned, with Chinese and American investors both having the largest stakes at 1.9 percent each, followed by the UK at 1.1 percent.

Despite arguments that foreign ownership is part of an open economy and free trade system, Luke Simpkins, the CEO of NSW Irrigators’ Council (NSWIC) told The Epoch Times that there have been genuine concerns in the irrigation sector over the impact of foreign ownership on the livelihood of local farmers, and this was accentuated by the drought last year.

On behalf of NSWIC, the former federal MP for Cowan West Australia wrote to federal Treasurer Josh Frydenberg late last year to express serious concerns about foreign ownership and agricultural purchases “at the time when farmers were financially and psychologically weakened by the drought.”

He also highlighted the “greater concern about Chinese ownership” as in most cases the companies appear to be linked to the Chinese government.

“The point that the free trade approach of Australia in property and water ownership is not reciprocated by China tends to undermine the faith of Australians in Chinese ownership,” Simpkins said in an email to The Epoch Times.

“The punitive action by the Chinese Government against Australian agriculture also erodes the views of Australians on the broader property ownership matter, ” he added, referring to the escalating threats by Beijing about Australian barley and beef exporters over the last two weeks.

Chinese Entities Dance to the Tune of the CCP

Queensland National MP George Christensen said that Australia had good reason to question the intention behind the Chinese entities’ purchase of water entitlements at such a scale that has made “China have more Australian water than there is in the Sydney Harbour.”

“The problem is they use these purchases of strategic Australian assets, including water, for the benefit of the Chinese Communist Party and not the benefit of Australia,” he told The Epoch Times.

He said that the real danger to Australia’s interests is that Chinese companies are not just driven by profit, which is the case with foreign entities from other countries and which is “understandable.” Rather, the Chinese companies are acting on the instruction of a “brutal regime” which means that “business, both state-owned and private, have to dance to its tune.”

“When your motive is to continue the subjection of a billion people and turn other countries into vassal states that you can also control then we have a big problem!” he said.

Christensen is the chair of the joint standing committee on trade and investment growth and recently initiated an inquiry into China’s economic infiltration of Australia. He is encouraging the public to submit evidence related to any such water rights transactions that may be detrimental to Australia’s interest.

In fact, episodes involving the reckless conduct of Chinese entities are not rare.

In 2018, Chinatex Australia—associated with Chinese state-owned Unibale—was reported to have attempted to evade a $31 million compensation payment ordered by the Supreme Court of NSW to local beef provider Bindaree for reneging on beef supply deals agreed in 2016.

Former national senator John Williams warned in the Senate that Chinatex Australia’s conduct should be a “great concern to all Australian companies who do business with Chinese state-owned companies.”

In an attempt to regulate foreign ownership of water entitlements, the federal government introduced a self-reporting register, requiring overseas companies that own water entitlements to declare their interests to the ATO.

The register is not accessible to the public, and there is limited detail about the owners or the usage of water.

The ATO also confirmed to ABC’s 730 that it has had “limited opportunities” for compliance activity since the system was established.

It was also revealed that the Chinese acquisition skirted around the Foreign Investment Review Board (FIRB).

Law firm McCullough Robertson partner Duncan Bedford told 730 that the FIRB approval may be required for the acquisition of water assets when it forms part of a broader business acquisition, but on its own, water entitlements do not require FIRB approval.

More concerning, such transactions are largely exempt from the tightened foreign investment restrictions introduced in late March, which is understood as a preemptive measure to prevent China from snapping up Australian’s strategically important assets during the crisis induced by CCP (Chinese Communist Party) virus, commonly known as novel coronavirus.

Under the new restriction, nearly all foreign asset purchases are subject to FIRB approval.

Professor Quentin Grafton of the Australian National University argued that concerns about the acquisition of water assets by foreign investors can be addressed with a transparent public information system, which is essential to foster a fair and level market that leaves no ground for unfair abuse of market power.

Grafton, a water economist, suggested that the focus should be placed on setting up a complete and above-board registration system covering both Australian and foreign investors to make effective scrutiny possible.

“As such, it is important that Australians know who is using our water, be it individual or corporate, or Australian or foreign entity, as well as what the water is being used for,” he told The Epoch Times.

“This should be a public resource and it’s critically important to the country,” he said.

He is hopeful that the ACCC’s investigation into water trading markets in the Murray-Darling Basin will shed more light on what needs to be done to ensure a fair market.

The ACCC is expected to submit to the Treasurer an interim report on the inquiry by May 31 and provide the final report by the end of November.