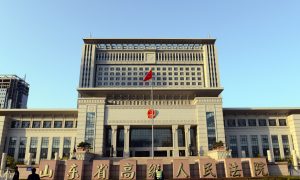 Gesticulating to unseen persons in a courtroom, Chinese rights lawyer Wang Yu said: “You’re all a bunch of hoodlums.”

“Clerk, put my words on the record: You’re all hoodlums, all hoodlums,” she added. Shortly after uttering those words, bailiffs removed the white-suited Wang from the courtroom.

The video was shown as part of a China Central Television broadcast on July 19, heavy with commentary insinuating that Wang was “destroying court order,” overlaid by images of her angrily pointing at bailiffs.

It was the latest attempt by the Communist Party to destroy the reputation of human rights lawyers in China, and has gone hand-in-hand with an on-going campaign of mass arrests and questioning of lawyers, legal firm staff, and rights activists across the nation.

But what CCTV didn’t show the Chinese people was much more telling: When a female defendant, and a Falun Gong practitioner, rose to protest the break in legal procedure, she was kicked and pinched in the neck by bailiff, and pinned down in the dock by three others.

Then, lawyer Dong Qianyong tried to protest the assault on his client—explaining how she had been stripped naked and tortured in custody, and threatened with having her private parts attacked with electric batons—but other bailiffs then seized and violently ejected him from court, throwing him to the ground, and choking him until he was unconscious.

It was at this point that Wang Yu had enough, and stood up to shout, “You’re a bunch of hooligans, four big men bullying a woman; you should be ashamed!” She then said what was shown in the CCTV clip before being expelled from the courtroom.

The case depicted in the CCTV clip stretches back to the arrest of three Falun Gong practitioners in northeast China in 2013; the April 22 hearing at the Shenhe District Court in Shenyang, northeast China, is the fourth court session, each of them riddled with judicial irregularities and often outright abuses.

Many Chinese citizens are skeptical of the Party’s claims. For instance, the Wang Yu clip was too short to show that she was the provocateur, said many netizens on Chinese social media. Others were keen to learn the full court proceedings.

“Under what circumstances did lawyer Wang Yu shout at the judge?” wrote He Bing, the deputy head of the law faculty in the China University of Political Science and Law—Wang’s alma mater—on the Chinese microblogging site Sina Weibo.

Two persons with knowledge of the April 22 trial—a male lawyer in mainland China and a female eyewitness—told Epoch Times that CCTV had portrayed the events out of context. They spoke on condition of anonymity given the intense purge of lawyers taking place now in China.

Wang and four other lawyers from Fengrui Law Firm in Beijing were defending three practitioners of Falun Gong, a traditional Chinese spiritual discipline that has been brutally persecuted by the Party since 1999.

Proper legal proceedings are scarce in China, and almost completely absent in Falun Gong cases. The April 22 case proved no exception—the judge chose to read out the indictments to the practitioners separately, but Chinese law states that all defendants in the same joint trial should be present at the same time.

Wang has often sharply criticized the harsh treatment of her clients, and has been dealt with roughly for her remarks. After she protested to a Hebei court’s refusal to defend her client on July 2, bailiffs dragged her from a court and tossed her “like a bag onto the street,” according to an eyewitness.

About a week after the Hebei incident, over a dozen police broke into Wang’s Beijing home and took her away. Wang’s husband has also been placed in detention, while her 16-year-old son has been prohibited from flying to Australia to attend high school and remains under surveillance.

Since the first arrests on July 10, over 240 rights defenders have been targeted by security forces, according to Hong Kong nonprofit China Human Rights Lawyers Concern Group.

Fengrui, the law firm which has taken on many high-profile human rights cases, has been demonized by the Party and has seen the disappearance of many of the staff—director Zhou Shifeng, Wang Yu, and at least three other lawyers and legal staff have been detained and remain incommunicado.