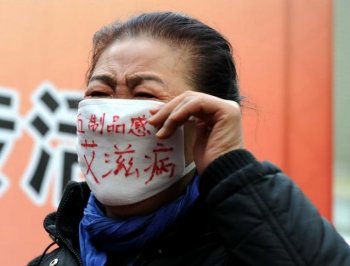 A woman who contracted HIV from infected blood joins a demonstration during an AIDS awareness event on World AIDS Day at Beijing's south railway station in 2009. (AFP/Getty Images)
China

Chinese State Media Says Aids-Like Disease is in the Head

For the last week the Chinese media has been abuzz with talk of an unknown, highly contagious AIDS-like disease, termed “HIV-negative AIDS,” that has allegedly been spreading in China for several years and infecting thousands. Now official media have stepped in to put the matter to rest: there is no such disease, and people claiming to be sick from it need psychological help.

A volley of official propaganda came around the same time: 10 and 12 minute video programs by Xinhua and the People’s Daily aiming to debunk the claims, a series of reports and opinion articles warning against “AIDS-phobia,” and a troupe of experts, some of whom were simply government officials, calling for people with the condition to stop listening to the Hong Kong media reports and seek counseling for their psychological problems.

People who suffer from what they regard as the unidentified illness with debilitating AIDS-like symptoms have spoken out against the official statements and demanded clarification from the Health Ministry; they have also been turning to the media and health experts for help.

Symptoms of the alleged illness include swollen lymph glands, blood under the skin, moss on the tongue, aching joints and more.

Hong Kong’s Oriental Daily and Ming Pao have produced extensive reports on sufferers and their ailments, and have alleged that several thousand people in six provinces have been infected.

Patients say they have been intimidated by health officials and told not to speak about it, and some were given the diagnosis of “mental illness” for their complaints.

A patient from mainland China left a message on The Epoch Times’ Chinese online forum, saying: “This disease really exists and it is highly contagious. My family and friends have all been infected by me. I live in pain and misery every day and can hardly walk. Officials from the Center for Disease Control and Prevention (CDCP) warned me not to spread rumors or I would have to bear the consequences. They threatened me that if I continued to talk about it, nobody would listen to me, and people would regard me as insane,” he wrote. The Epoch Times was unable to verify the claims, but the description comports with actions typically taken by Chinese authorities when seeking to control information.

One woman told The Epoch Times that she believes she was infected from getting an eyebrow tattoo five years ago. Afterwards she developed a rash, hives, and an oral fungal infection. The symptoms worsened with each year. In addition to a lung infection and osteoporosis, all her joints hurt and make cracking noises. Her 17-year-old son is also infected, and they both have very severe symptoms now, she said.

The woman said she never thought about HIV before she was ill. “I am college-educated and quite capable of making a judgment about this disease. I am not making a blind conjecture, all my physical examinations can verify that my immune function is very poor,” she said.

She said she has taken her son to see doctors in Beijing, and that doctors she saw admitted that there was indeed a problem, but because of the tone set by higher officials, there was nothing that they could do.

She said one expert told her that the issue is too sensitive, and he would lose his job if he spoke about it, but he would speak if higher officials came to investigate the disease.

Deng Haihua, the Ministry of Health’s spokesperson, told Chinese media on April 6 that the CDCP recruited 59 volunteers suffering from the AIDS-like symptoms on QQ, a Chinese Internet service, between September 2009 and January 2010, to participate in a clinical test for HIV and other unknown viruses.

Patients who participated in the study were given an HIV test, a routine physical examination, and a psychology questionnaire. On Feb. 21, 2010, they were diagnosed as normal on all test results, except they were found to be “obviously lower than average people” in psychological health. A Beijing News report says “38 of these people took immature preventative measures… in front of the great pressure of being suspected of carrying an HIV infection, they were not mature or humorous in adopting preventative measures.”

In February 2011, the CDCP told the patients that the blood samples of the 59 patients had been sent to a lab in the United States that specializes in virus testing, but wouldn’t disclose the name of the lab. An Epoch Times reporter contacted an official at the CDCP who said the lab was at the University of California San Francisco. The Epoch Times contacted the university’s Department of Microbiology & Immunology on March 15 but the relevant professor was unavailable.

During the Communist Party’s recent two annual leadership sessions in Beijing, patients had prepared to appeal but were told by CDCP staff that they didn’t need to because blood samples from the study had already been sent to the U.S. for testing, according to reports online. Sufferers suspected that the authorities simply did not want a public health crisis.

In a telephone interview with The Epoch Times, a man identifying himself as “Hope” from Fujian Province said that he’s sure that he does not have AIDS phobia. “My wife and I both have symptoms that clearly tell us we are infected with a virus,” he said.

He said that someone with insider information told him, out of sympathy, that the disease is a variation of AIDS that the authorities don’t want to acknowledge now. “He has been trying to convince me to buy AIDS drugs and claims some people have cured their disease by taking the drugs,” Hope added.

According to a netizen from Xiangtan in Hunan Province, the Institute Pasteur of Shanghai examined the blood of five HIV-negative AIDS patients in December 2009. A staff in charge of the examination told one of the patients that the same kind of virus was found in all five patients. The staff even asked if taking AIDS drugs had any effect, and said the test results would be released on Dec. 28. But no further notice came forth. When the patient inquired again, he said, Institute Pasteur of Shanghai denied any such statements.