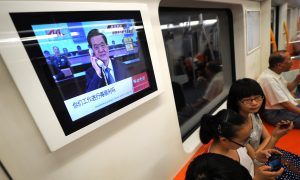 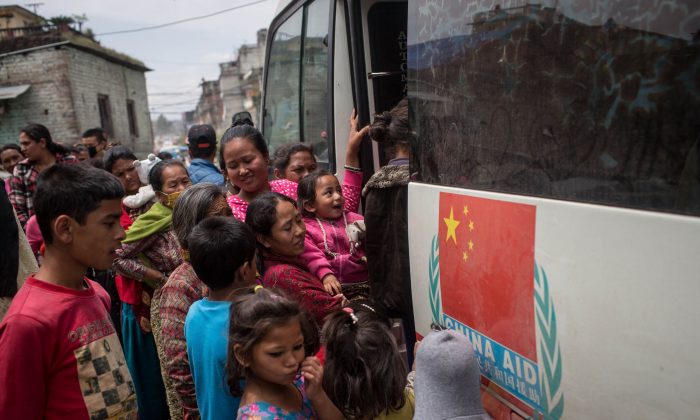 People wait in line to be seen by doctors at a mobile hospital bus on April 30, 2015 in Kathmandu, Nepal. (Chris McGrath/Getty Images)
Aviation News

While the world’s media has been busy in the aftermath of Nepal’s earthquake recording the suffering of the Nepalese people, the rush to find survivors, and the arrival of aid, China’s state-run media has been busy hyping the care shown by the Chinese regime for the Chinese stranded there. Unfortunately, those reports are not true.

The Communist mouthpiece Xinhua News agency reported that three major Chinese airlines arranged flights on April 26—the day after the quake—that would transport relief supplies and rescue teams to Nepal and then help over 1,000 passengers travel from Kathmandu to China, including 683 Chinese tourists stuck in Nepal.

The Xinhua report headlined “After the Earthquake—Motherland, We Are Lucky to Have You!” said the first commercial Chinese airline to Nepal will bring “a full cabin of warmth” and return with “much envied Chinese.”

You will never see the 10 aircraft that they said were on their way here.
— Chinese tourist stranded in Nepal

The article quoted the blog post of a Chinese tourist stranded in Nepal: “Just heard this: with a Chinese passport, with or without an airline ticket, compatriots will go home tomorrow in one of the 10 aircraft coming over.”

An article on the mainland China news portal Sohu.com contradicted Xinhua, saying, “That was false information.”

In fact, Kathmandu’s airport was under strict control, and no one without a ticket was allowed to enter—compatriots without tickets would not even be allowed in, much less receive a free ride home.

The Chinese military attaché in Nepal, Liu Xiaoguang, said that even those who had obtained tickets from family members in China could not board the aircraft.

The first batch of Chinese returning to China through Air China and China Eastern Airlines were individuals who had held valid tickets for the day or had made the purchase on that day.

According to a China Business News report, airline ticket prices from Japan to China during the Japan earthquake in 2011 had also soared. A sudden increase in demand was said to have caused the ticketing system to automatically raise the fares.

Sohu.com quoted Liu Xiaoguang as saying that some airlines were profiting by raising the price to 13,000 yuan. “It’s like looting people, taking advantage of a natural disaster,” he said. This report was soon deleted from the Chinese Internet.

On April 27, the Ministry of Foreign Affairs also said that there had been no instruction to provide a free airline ticket to anyone in Kathmandu with a valid Chinese passport.

On the morning of April 27, many Chinese tourists stranded in Nepal complained through online posts:

“The airline agent shouted at us: ‘Either get your friends and family to help to pay for the ticket, or just wait here.'”

“You will never see the 10 aircraft that they said were on their way here. … The phone to the embassy is busy the whole time. … All the glorious claims are so disgusting.”

“The Communist regime says one thing and does another. The CCTV said aid craft will be sent forth. But, there are none. I can see that at least 500 Chinese are stranded at the airport now. … Some were also wounded. Nepal has provided us with tents, we have received nothing from the Chinese Embassy. There are dozens of Chinese waiting in the Nepal vice president’s residence. There are no blankets, tents, water, or food.”

“On hearing news of the earthquake in Nepal, India immediately notified their own people in Nepal to go to the airport and get on the free flight with their passports. I really envy them, because their country’s military aircraft have flown four times today to fly them home. But our own aircraft paid with our own money are still nowhere to be found.”

Former Shaanxi TV editor and reporter Ma Xiaoming told NTD TV, “About retrieving compatriots from the earthquake zone, what’s claimed and what’s done are always two different things. We have seen enough over the years. It’s always reported how actively the government has engaged in the rescue, organized the relief, and taken the lead.”

Chinese returning from Nepal shared their experiences through Chinese social media such as Weibo and WeChat.

Netizen Sharon-Xixi wrote on Weibo on the April 27, “Last night the embassy told us there is a rescue flight at nine o’clock to fly us home, but in fact we waited for two nights and two days. Air China kept saying, ‘Without buying a ticket, don’t even think of leaving! Even the wounded have to pay!’ The Indians with a passport can go home without paying a penny! What has happened to our country?”

Sharon-Xixi also wrote, “The Embassy is filled with dead weight. They know of no emergency measures, rescue, and support, or sympathy. We were not allowed to enter the Embassy. We had to walk alone to the airport. This is how the Chinese treat their compatriots.”