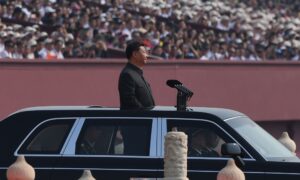 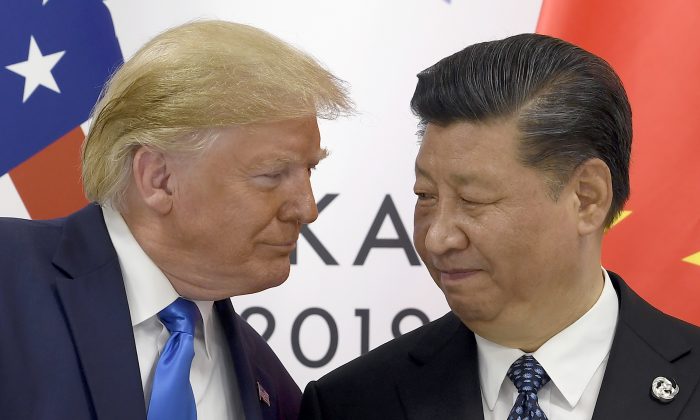 President Donald Trump, left, meets with Chinese President Xi Jinping during a meeting on the sidelines of the G-20 summit in Osaka, Japan on June 29, 2019. (AP Photo/Susan Walsh)
Chinese Regime

Zhang Dun
Zhang Dun, Ph.D., has covered current affairs and politics in China since 2010, and knows well the political system of the Chinese Communist Party. Previously, he was a chemical researcher at a Chinese institute, at Kyushu University in Japan, and at several institutes in the United States.
View profile
Follow
biggersmaller
Print

Various state-run media in China reported that Chinese leader Xi Jinping focused on socialism with Chinese characteristics, governance capability, and modernization of the state governance system at the Party’s ongoing 4-day political meeting that began on Oct. 28 in Beijing. However, a source close to top Chinese officials revealed that those were not the key issues discussed at the meeting, and Chinese media are trying to divert public attention from the crisis China is facing.

The fourth plenary session of the Chinese Communist Party’s (CCP) 19th Central Committee should have been held a year ago.

Speaking on condition of anonymity, the insider, son of a Party elder, told the Chinese-language Epoch Times that the meeting centered around two topics: the U.S.-China relationship and turbulence in Hong Kong.

“These two issues are Xi’s biggest headache,” he said, “No solutions have been identified yet.”

He further explained that although U.S. President Donald Trump and and his counterpart Xi Jinping are expected to sign an interim trade agreement in Chile next month at the APEC summit, the terms of the final pact are still undecided.

“It all depends on whether China will purchase agricultural products from the United States as promised. However, I heard that China has demanded additional terms, which cast a shadow on reaching a ‘phase 1’ trade deal,” he said.

“However, President Trump meets with Xi at the APEC summit in less than 20 days. How can Beijing resolve the unrest in Hong Kong peacefully within this time frame?”

“Some think that Xi plans to meet the five demands of the protesters to compromise with the United States, which is very likely to happen. But if it does, the Chinese authorities will certainly take revenge on the protesters some time later,” he opined. He also mentioned that it remains unknown if Xi and his clan of Party members will be able to control the situation when discussing these issues as opposing voices may prevail.

“The current situations of the U.S.-China relationship and Hong Kong protests are obvious failures. Someone will have to bear responsibility for them. Therefore, the pressure on Xi is tremendous,” he said.

However, the CCP does not plan to carry out any fundamental reforms, according to the source.

“They are still trying to solve these problems with a ‘patch and repair’ mentality; but there are holes everywhere. How can a band-aid solution work? The situation will continue to worsen until the CCP meets its demise,” he predicted.

Zhang Dun
Follow
Zhang Dun, Ph.D., has covered current affairs and politics in China since 2010, and knows well the political system of the Chinese Communist Party. Previously, he was a chemical researcher at a Chinese institute, at Kyushu University in Japan, and at several institutes in the United States.
TOP NEWS