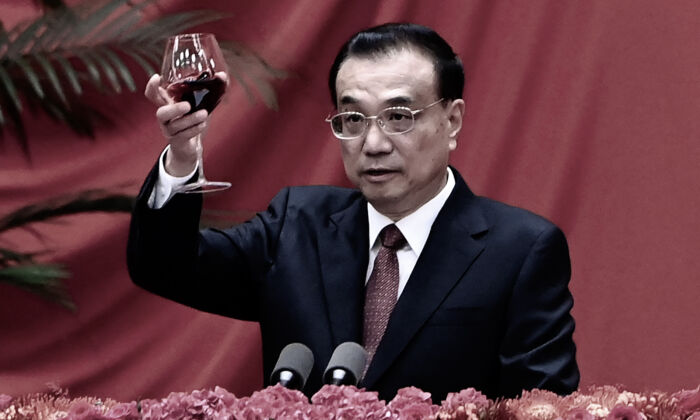 Chinese Premier Li Keqiang raises his glass after a speech at a reception at the Great Hall of the People in Beijing on Sept. 30, 2021. (Greg Baker/AFP via Getty Images)
Chinese Regime

As customary, Li delivered a speech at the State Council’s National Day reception on Oct. 1. However, news about his speech appeared on page 3 of People’s Daily, while last year the same topic was printed on page 2.

Then on Oct. 12, Li held a video meeting with Mongolian Prime Minister Oyun-Erdene Luvsannamsrai, and People’s Daily posted a report about the meeting on page 4 a day later.

News reports about Li’s activities have rarely made it on the front page since last year, Radio Free Asia (RFA) said in a Twitter post. His 2020 speech on National Day appeared on page 2, and this year on page 3. On Oct. 13, Li was further downgraded to page 4. This is very rare to happen to a Chinese premier since the CCP took power in 1949, RFA said.

Li is known as the most diligent CCP leader when it comes to visiting disaster-stricken regions, but People’s Daily and Xinhua News don’t attach much importance to news about him. When he visited severely flood-hit areas in Chongqing on Aug. 20 last year, it took People’s Daily four days to put out a report.

What’s more, on July 31 last year, Vice Premier Liu He publicly embarrassed Li at the opening ceremony of the Beidou-3 navigation system. The CCTV live broadcast showed that when Liu read out the list of leaders participating in the ceremony, he didn’t allow Li enough time to stand up and respond to applause, putting him in an awkward situation.

According to analysts, this kind of treatment is to reprimand Li for making remarks that contradict Party leader Xi Jinping’s positive depiction of the Chinese economy.

Chinese financial YouTuber Sober Observer said in a blog that Li’s honesty can be said to be a slap on Xi’s face for his China dream.

Disagreements between Xi and Li must have been going on for quite some time. RFA said in an article last year that China’s propaganda minister Wang Huning instructed People’s Daily as far back as several years ago that news about Li cannot make front-page headlines. And even if there is no report on Xi that day, Li cannot make the front page, Wang said.