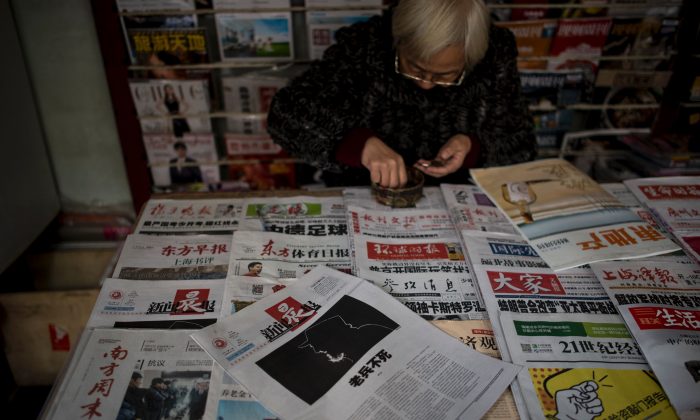 In response to President Donald Trump’s May 5 announcement via Twitter that the administration would increase tariffs on Chinese goods, China’s state-run media soon went on the offensive, harshly criticizing the United States.

The Chinese Communist Party’s mouthpiece newspaper People’s Daily played tough in a commentary published May 7, claiming that the regime wouldn’t make any concessions—and has “complete confidence” that it can withstand any economic challenges the U.S.–China trade war would bring.

“When things are unfavorable to us, no matter how you ask, we will not take any step back. Do not even think about it,” the People’s Daily article read.

As the Chinese trade delegation headed by Vice Premier Liu He was making its way to Washington for the 11th round of trade talks beginning May 9, China’s Ministry of Commerce similarly warned of retaliation in a brief statement released late on May 8: “If the U.S. side implements tariff measures, the Chinese side has no choice but to adopt necessary retaliatory measures.”

After Trump’s announcement, officials in the Chinese trade delegation or China’s Foreign Ministry haven’t made public statements about the Chinese regime’s stance. But Chinese state media reports, intended as propaganda for the Chinese public, can offer clues to the regime’s attitudes.

In fact, back in April, the Global Times, a hawkish newspaper published under People’s Daily that focuses on international issues, provided detailed explanations of “Why China Should Never Make Any Concessions in the China-U.S. Trade War,” in an April 20 editorial.

The article blames the United States for provoking the trade war.

The Global Times article read, “China does not want to fight a trade war, but it is not afraid of it. If Washington takes the initiative to provoke and intensify the trade war, China will not evade it and will definitely respond with a head-on fight. That means … every time the United States launches an attack at China, we will take retaliatory measures on the same scale,” it warned.

It went on to explain that China wouldn’t make concessions because the United States has been a bully. “Washington has shown an unprecedented hegemony.”

Perhaps alluding to the United States’ criticisms of China’s intellectual property theft and ongoing negotiations that have sought to pin down an enforcement mechanism to ensure the Chinese regime curbs such theft, the editorial chastised the administration for “suppressing China’s science and technology innovation.”

The editorial concluded that the trade war is bound to be a “big lose-lose for both the United States and China.” Nonetheless, the article sought to boost public confidence by stating that China will still come out strong. “External challenges will turn out to become a stimulus for China’s development in high-tech and frontier science … China’s strong resilience will eventually overpower Washington’s will to continue the trade war.”

Despite the boastful propaganda, many Chinese netizens have expressed support for Trump’s tariffs. Those hopeful for true structural reform in China’s economic system celebrated the tariff increase announced by Trump. They began spreading an internet meme calling Trump a “great savior” of the Chinese people.