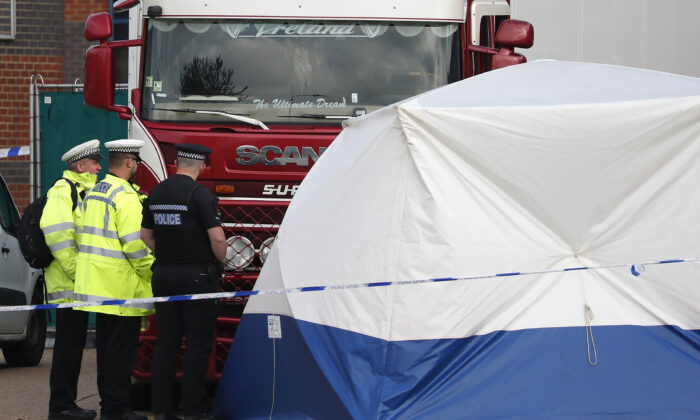 Police officers attend the scene after a truck was found to contain a large number of dead bodies in southeastern England, on Oct. 23, 2019. (AP Photo/Alastair Grant)
US-China Relations

Chinese state media has demanded that CNN apologize for posing a question they deemed “extremely ridiculous” relating to the 39 people found dead in a truck in eastern England.

Last week, 39 bodies were found frozen to death in a sealed trailer in Essex, 31 of whom were men and eight women. It prompted British authorities to launch one of the largest murder investigations in the country’s history.

The police initially believed the victims to be Chinese nationals, but backtracked on the statement Oct. 25 night, saying that their identities were still “a developing picture.” Some media have reported that rural villages in Vietnam are searching for missing relatives, leading to speculation that the victims could be Vietnamese migrants traveling with fake Chinese passports.

A CNN reporter asked the Chinese foreign ministry spokesperson Hua Chunying for “some context” about the case on Friday during a regular press conference in Beijing.

A day prior, Hua had claimed that the country made “historic leaps” over the course of the Chinese Communist Party’s 70 years of ruling, in response to U.S. Vice President Mike Pence’s speech criticizing China.

The reporter then asked: “As you laid out, there have been many successes, advances and progress of the past 70 years with the People’s Republic of China…Hearing that and then from an outside perspective, what would then motivate people from China to want to leave in such a risky way?,” referring to the UK case.

Hua responded that the question was “inappropriate” in presuming the victims were Chinese. This is despite the fact that the Chinese embassy in the UK also initially released a statement acknowledging the incident.

“It exposes something in your mind or rather, in the mind of some American media that you represent,” she said, without elaborating.

On Oct. 28, China’s state broadcaster China Central Television (CCTV) lashed out at CNN, saying that the reporter’s question had “sinister motives,” and that “CNN reports the world with bias.”

“[The question] showed a lack of basic sympathy,” the commentary stated. It went on to criticize the reporter for linking the human trafficking with China’s national celebration. “As to what it wants to implicitly suggest, or rather expressly demonstrate by chaining the two together, only CNN itself will know,” it stated.

“The CNN reporter owes an apology to the families of the 39 victims and to Chinese people, although the debt you [the reporter] owe is already too much.”

When asked about the latest update regarding the deaths, a Chinese foreign ministry official said on Oct. 28 that they have been asking the British side for “more valid information” on the victims’ identities. He added that “illegal migration and human trafficking are international problems” and that the Chinese government will make “rigorous effort” to address them.

He declined to confirm whether there were illegal Vietnamese migrants with fake Chinese documents going to Europe via China among the victims, but said that the Chinese Embassy in Vietnam was in “close communication” with relevant local departments.

The truck driver, 25-year-old Maurice Robinson, was charged with 39 counts of manslaughter and two counts of conspiracy. He is in custody and due to appear in court on Nov. 25, according to the BBC.

Three suspects arrested during the investigation were released on bail on Sunday.

At a court hearing on Monday morning, the prosecutor described Robinson to be part of a global smuggling ring that has trafficked a large number of illegal immigrants into the country.

At least 24 Vietnamese families reported missing relatives whom they fear to have died in the truck tragedy, according to Vietnemese media reports. Local authorities have taken forensics samples from the family members of those missing to assist British police in their probe, according to Vietnamese newspaper VnExpress.

The British Prime Minister Boris Johnson sent condolences to the victims on Oct. 28, saying that “the whole nation, and indeed the world, has been shocked by this tragedy.” He added that they were “innocent people who were hoping for a better life in this country.”

He also promised to bring the criminals to justice. “In condemning the callousness of those responsible for this crime we in the government of the United Kingdom resolve to do everything in our power to bring the perpetrators to justice.”