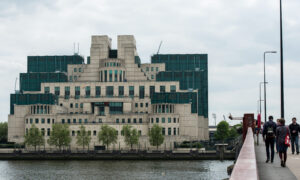 China’s communist regime has moderate to heavy influence over 40 percent of European businesses acquired by Chinese companies in the past decade, research has found.

Datenna, a Dutch consulting firm specializing in screening Chinese investments, looked at data for hundreds of European companies that have sold most or all of their shares to Chinese firms to find out how much influence the Chinese state has over the companies as a shareholder.

The data is presented as the China–EU FDI (foreign direct investment) radar—an interactive map that illustrates levels of state influence.

The FDI radar, based on Datenna’s analysis of the acquisitions’ ultimate beneficial ownership (UBO), “is an on-going research initiative aimed at providing greater transparency on Chinese investments in Europe,” Datenna said in a statement.

Currently, the map illustrates more than 650 acquisitions since 2010.

Almost one in four (161) of the acquisitions were found to have high levels of influence by the Chinese state, meaning the ultimate controlling shareholder is part of the communist bureaucracy.

Approximately 15 percent of acquisitions have medium state control, where state apparatus has a “substantial” stake but aren’t necessarily seen as controlling the company.

The other 60 percent of the companies have no substantial state influence behind their investors.

Datenna said it is “extremely challenging” to determine UBO in China, because state influence is often buried under layers of ownership.

“The government’s influence in a legal entity is commonly found in several layers of ownership and can consist of a combination of central and local government investment vehicles, amongst others,” Datenna stated in a white paper published in September.

Through five layers of investment vehicles, JAC Capital is controlled by the Chinese State Council—the highest administrative body in China’s government. Ampleon is therefore under the majority control of the Chinese regime according to Datenna’s research.

After the acquisition of Ampleon by JAC Capital in 2015, Ampleon CEO Reinier Beltman told the Microwave Journal that it would “specifically target [the aerospace and defense] market moving forward.”

As a European company, Ampleon isn’t subject to American international traffic in arms (ITAR) legislation. According to Datenna, “Ampleon claims to be the only company in the world that can produce high-quality GaN (gallium nitride) technology outside ITAR legislation and are therefore uniquely positioned to sell this technology” for use in commercial and defense products.

Beltman told the Microwave Journal that GaN technology is used in “commercial aviation and radar applications, aerospace and defense systems, and broadband solutions.”

“It is estimated that over half of all mobile telephone conversations in the world go through Ampleon chips,” according to Datenna, which are also included “in the radar systems of the Dutch Navy.”

Another example is the 2017 acquisition of Imagination Technologies, widely regarded as one of Britain’s most important technology companies.

The semiconductor and software design company, whose technology is used in almost one-third of smartphones worldwide, is “now controlled by the Chinese government” according to Datenna, after it was acquired by investment firm Canyon Bridge.

Through seven layers of investment vehicles, Canyon Bridge is controlled by the Chinese State Council.

The UK government, under then-Prime Minister Theresa May, approved the deal on the basis that Canyon Bridge was regulated by U.S. law due to it being incorporated in the United States.

U.S. Treasury Secretary and chairman of the Committee on Foreign Investment in the United States (CFIUS) Steven Mnuchin said that “the transaction poses a risk to the national security of the United States that cannot be resolved through mitigation.”

The national security risk “relates to, among other things, the potential transfer of intellectual property to the foreign acquirer, the Chinese government’s role in supporting this transaction, the importance of semiconductor supply chain integrity to the U.S. government, and the use of Lattice products by the U.S. government,” Mnuchin said in a statement.

In April, UK Culture and Media Minister Oliver Dowden intervened when Canyon Bridge moved to appoint board members with links to China Reform Holdings, which is owned by the Chinese State Council.

Sky News reported that Evans wrote in his resignation letter, “I will not be part of a company that is effectively controlled by the Chinese government.”

Chair of the Foreign Affairs Select Committee Tom Tugendhat told the BBC he was concerned that technology developed by Imagination Technologies “could be used to fine-tune the design of so-called ‘backdoors’ into strategically important digital infrastructure.”

At a May 5 Foreign Affairs Committee hearing, Imagination Technologies then-acting CEO Ray Bingham, who is also the co-founder of Canyon Bridge, said that “Imagination is not Chinese state-owned.”

“I have no evidence to suggest that the interests of our limited partners are anything other than business interests.”

The European Union currently doesn’t have a screening body equivalent to the CFIUS.

The bloc started to address the increasing concern by adopting a regulation in March 2019 to set up “a framework for the screening of investments from non-EU countries (foreign direct investment) that may affect security or public order.” The regulation comes into effect on Oct. 11.