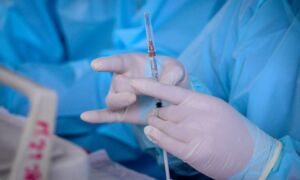 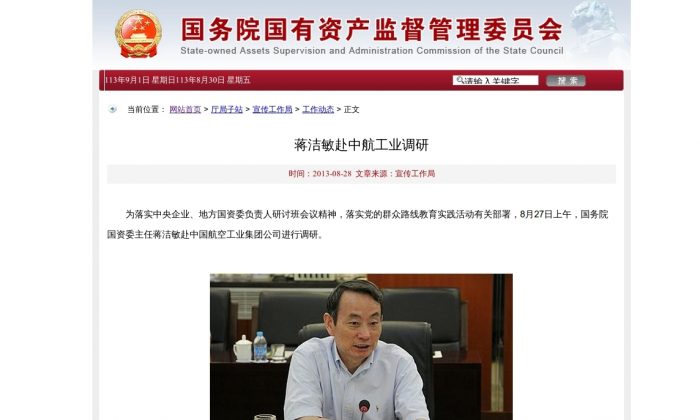 Jiang Jiemin is pictured on the website of the powerful agency that oversees China's state-owned companies. The post was later deleted from the website, after news that he is being investigated was announced. (Screenshot via Epoch Times)
China

The director general of the department that oversees state-owned companies in China has been put under investigation for corruption by the Communist Party’s internal disciplinary agency, according to a short statement by the state-run Xinhua on Sunday.

Jiang Jiemin previously spent decades in the state-run oil sector, and was most recently the head of China National Petroleum Corporation, an oil behemoth. The announcement now makes him the fifth oil cadre to be investigated in recent weeks: four high-level officials at the China National Petroleum Corporation have also been taken down and subject to corruption probes recently.

Jiang was appointed head of the state asset administration in November of last year, when he also became a member of the Central Committee, a group of over 300 high-level Communist Party officials that control the government. He now also has the distinction of being the first member of the Central Committee to be put under a corruption probe since the leadership handover last November.

The announcement that Jiang would be investigated is ostensibly part of the anticorruption campaign of Communist Party chief Xi Jinping, who since taking the helm last year has vowed to root out graft in the Party, attacking both the “tigers and flies,” a reference to lower-level officials and senior Party cadres respectively. Corruption probes are also a convenient and favored way to eliminate rivals in the brutal world of Chinese communist politics.

The proximate cause of the investigation of Jiang was an audit showing financial discrepancies after he left the China National Petroleum Corporation for his new job in March of this year, according to Caixin, a business publication in China.

But it was most salient for observers of the Party to note that the news of Jiang’s investigation also comes just days after South China Morning Post, an English-language newspaper in Hong Kong, reported that the former security czar, Zhou Yongkang, was also under an investigation for “disciplinary violations,” a common reference to corruption.

Jiang Jiemin is a protege to Zhou Yongkang, and Zhou has an extensive patronage network in the petroleum industry, where he cut his teeth as a Communist Party official. Epoch Times has for some time been informed by sources in Beijing that Zhou Yongkang was a target of investigation.

The Sunday announcement of Jiang Jiemin’s investigation was presaged earlier this year by a series of prominent, unfavorable media reports detailing complaints by former employees of PetroChina, the publicly-listed arm of CNPC, accusing Jiang of corruption and mismanagement. Political analysts said that such news would only make it to the front pages of Chinese Internet portals if propaganda authorities allowed it to, meaning that a takedown of Jiang was by that stage likely.

The State-owned Assets Supervision and Administration Commission (SASAC), the agency that Jiang so recently headed up, reacted swiftly to the announcement that its (now former) boss was under investigation for corruption.

An Aug. 28 article detailing his “investigation and research” trip to the Aviation Industry Corporation of China, a massive state-run aerospace manufacturer, was purged from the company’s website. It showed Jiang doing his best to “make deployments to implement the Party’s mass line education and practical activities,” a new propaganda initiative of Party leader Xi Jinping.

Also, on the carousel of executives featured on SASAC’s front page, all photographs of the dour-faced Jiang had vanished.