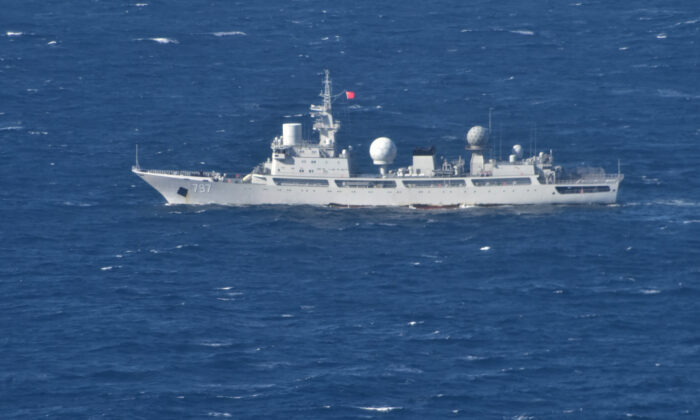 Defence forces are monitoring a Chinese surveillance vessel that looks set to arrive off the coast of the northern Australian state of Queensland as wargames involving U.S. and Australian defence forces begin.

The Tiangwangxing, which translates to Uranus, is scheduled to arrive July 16 and will park itself just inside Australia’s Exclusive Economic Zone—outside of Australia’s territorial waters—where according to international maritime law it has legal grounds to remain.

“They’re in an area where they’re allowed to be and we know they’re there and we’re keeping a close eye on it,” he told Sydney radio station 2SM on July 14.

When pressed on whether he was concerned about the presence of the vessel, Morrison responded, “We wouldn’t be watching them if we weren’t.”

“Of course we watch them. We’re aware of that. And they’re watching us.”

“We have been monitoring its approach to Australia for several days as part of Australia’s broader surveillance effort,” he added. “We fully expected a ship of this class to arrive in our region during the exercise and have planned for its presence, as we do for every iteration.”

Talisman Sabre is the largest bilateral training activity between the Australian Defence Force (ADF) and the United States military.

Talisman Sabre also takes place across most of the state of Queensland and sees military personnel test out the latest technology and military hardware.

Naval ships from the People’s Liberation Army have become a regular presence at each exercise.

The Tianwangxing is a Type 815 vessel and is fitted with advanced electronic sensors that can intercept and record U.S. and Australian communications for analysis.

Type 815 vessels have also been used in several surveillance missions, including patrolling the waters around U.S. bases in Guam and Hawaii and monitoring testing of the U.S. THAAD anti-ballistic missile defence system near Alaska.

Revelations around Tianwangxing emerged just a day after the Chinese Embassy in Canberra took issue with the Australian Foreign Minister issuing a statement recognising the fifth anniversary of the Arbitral Tribunal’s unanimous decision that the Chinese Communist Party’s claims to the South China Sea were unfounded.

According to the statement the Tribunal found that “China’s claim to ‘historic rights’ or ‘maritime rights and interests’ established in the ‘long course of historical practice’ in the South China Sea were inconsistent with the UN Convention of the Law of the Sea (UNCLOS) and, to the extent of that inconsistency, invalid.”

“UNCLOS sets out the legal framework within which all activities in the oceans and seas must be carried out,” she added.

“The Australian government has consistently called on the parties to the arbitration to abide by the Tribunal’s decision, which is final and binding on both China and the Philippines.”

The Embassy said it “deplored” the remarks and called on Australia to “stop any political manipulation.”