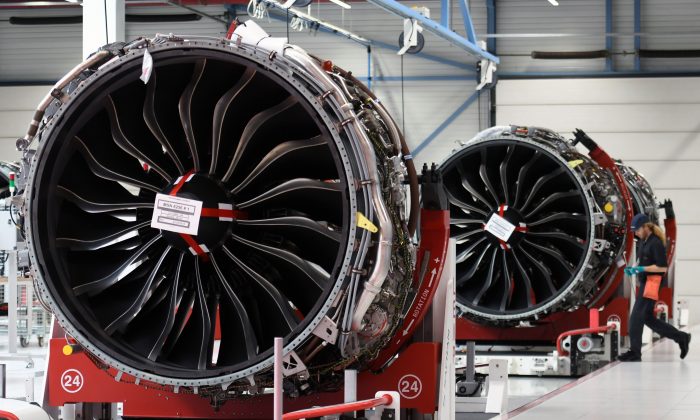 Aircraft engines at an industrial and technological engine manufacturer in France on May 17, 2018. (Pascal Pavani/AFP/Getty Images)
Crime and Incidents

The Justice Department unsealed an indictment on Oct. 30, alleging that Chinese intelligence officers conspired with hackers and company insiders to break into private companies’ computer systems with the goal of stealing intellectual property.

The Chinese agents were after details about a turbofan engine used in commercial airplanes, the indictment alleges (pdf).

From at least January 2010 to May 2015, the spies, officers, and their team of hackers focused on stealing the engine technology, which was being developed through a partnership between a French aerospace manufacturer with an office in China and a U.S.-based company, the Justice Department stated in a release.

The Chinese state security recruited insiders Gu Gen and Tian Xi, and with their help, the hackers breached the French manufacturer. Tian intentionally infected the company network with malware he obtained from a Chinese State Security officer.

Gu served as the company’s head of Information Technology and Security in Suzhou, China. He tipped off the conspirators when foreign law enforcement notified the company of the existence of malware on company systems. The conspirators then tried to cover their tracks.

The hackers also attacked other companies that manufactured parts for the engine, including aerospace companies based in Arizona, Massachusetts, and Oregon.

A Chinese state-owned company was, at the time, working on a comparable engine for jets made in China and elsewhere.

The hacker used multiple techniques, including spear phishing, sowing malware into company computer systems, using the victim companies’ own websites as “watering holes” to compromise computers of their visitors, and domain hijacking through the compromise of domain registrars.

One of the hackers, along with an associate also targeted a San Diego-based technology company “for their own criminal ends,” the release stated.

“The concerted effort to steal, rather than simply purchase, commercially available products should offend every company that invests talent, energy, and shareholder money into the development of products,” said U.S. Attorney Adam Braverman.

This was already the third time since September that the Justice Department’s National Security Division brought charges against Chinese spies from the Jiangsu State Security and their accomplices for stealing American intellectual property, said John Demers, assistant attorney general for national security.

“This is just the beginning,” he said. “Together with our federal partners, we will redouble our efforts to safeguard America’s ingenuity and investment.”