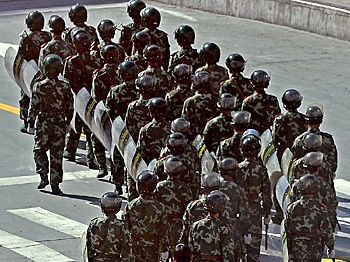 Residents look at Chinese soldiers as they patrol in Kangding county, the capital of Ganzi Tibetan Autonomous Prefecture, in China's southwestern Sichuan province on March 23, 2008. (Teh Eng Koon/AFP/Getty Images)
By Li Zhen

Li Zhen
View profile
biggersmaller
Print
HONG KONG–According to Hong Kong media, 70,000 Chinese communist soldiers were deployed to Tibet on March 10, the 50th anniversary of the 1959 Tibetan Uprising. The Chinese Communist Party (CCP) has been strengthening forces in Tibet and surrounding areas. Foreign reporters and tourists have been denied access to the area.

Cai Yongmei, the editor of Hong Kong’s Open Magazine who interviewed the Dalai Lama in 2004, condemns the CCP’s military control of Tibet. She believes the CCP is once again encroaching upon the rights of the Tibetan people.

Foreign reporters and tourists are blocked off from the entire area, including Hong Kong, Macaou, and Jigzhaigou, according to Cai. She believes this is not “liberation”, but rather a complete military occupation.

“If you are really liberating the Tibetans, then they would support you and say you are good. Why would you have to send so many soldiers to surround the area? The Tibetans are not allowed to say anything. They are now an oppressed and persecuted nationality,” said Cai.

Cai said that Tibetans have expressed their dissatisfaction with the CCP’s destruction of Tibetan culture. Cai believes that the CCP occupation of Tibet is more cruel than Japan’s invasion of China in the 1930’s.

According to Cai, during the Sino-Japanese war, China’s traditional culture was still preserved. However, during the Cultural Revolution, nearly all Tibetan temples were destroyed. In addition, nuns and monks were forced to return to a secular life under the CCP’s rule.

Cai believes that the Tibetan people should oppose the persecution, oppression, and aggression, and unify with China’s pro-democracy forces. She said that under a one-party dictatorship system, the Tibet issue will never be resolved.