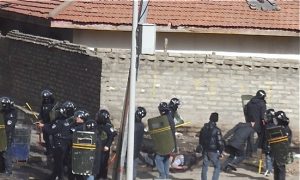 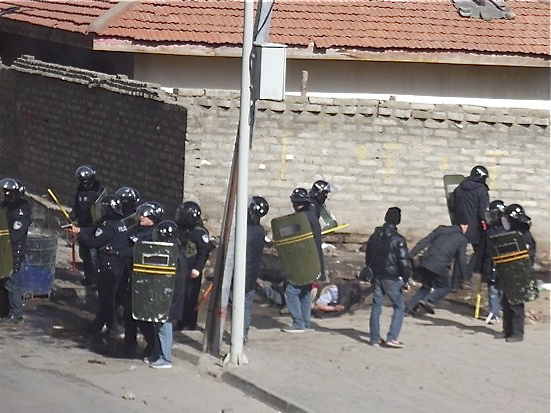 Police respond to a protest in Serta town, Sichuan Province, a partially-Tibetan populated area of China on Jan. 24, 2012. Chinese tourists are shocked at the militarization of Tibet, and their frank Internet posts show how the reality differs from official propaganda. (Students for a Free Tibet)
China

They come expectantly, Chinese tourists anticipating the fresh, clear air, the breathtaking Potala Palace, the happy natives grateful to the Chinese Communist Party for lifting them out of darkness–then the bleak reality of the militarization of Tibet clutches them, and when they can, they post on the Internet their shock and fear.

Once they are distanced from the domestic atmosphere of impenetrable Communist Party (CCP) propaganda, Chinese tourists are stunned at the grip of the security apparatus in Tibet. Their frank and sincere social media postings expose this disconnect, says a new report from International Campaign for Tibet (ICT).

The new report, “Has life here always been like this?”, is the result of sifting through thousands of social media posts that evaded the censors for the candid and revealing revelations about the CCP’s “stability maintenance” operations in the Tibetan regions.

From Lhasa a bewildered tourist who encounters the thick military presence writes: “People’s Armed Police, Special Police, snipers, police, troops standing at the ready, it felt like a war was about to start… Has life here always been like this?!”

“There are all kinds of riot control vehicles parked on the streets, it reminds me of what you see when they show the streets of Iraq on TV,” writes an observer from the small town of Lithang.

Another nervously tells readers: “There are People’s Armed Police patrolling the streets… They were holding big guns… The streets are full of explosives-proof vehicles and police cars… Repression is in the air… Could something happen? I’m really terrified.”

“I’m getting out of here quickly,” taps out another anxious tourist.

While Tibetans are brutally punished for exchanging photos or other “sensitive” material by cell phone, Chinese citizens are treated with greater leeway, though often they are ordered to erase photos or ordered not to take photos.

“If you take a picture of a fire truck they’ll make you delete it… Think again about taking a picture of Special Police vehicle… What is wrong with this society? The cost of maintaining stability truly is high!” wrote one disgruntled tourist.

The Internet and cell phone blockages, the security checkpoints, and the repeated requests for ID cards take a heavy toll on the tourists.

One resigned fellow writes: “Armored vehicles are patrolling the streets, all internet access is blocked, including text messages, going out to eat there are still police asking questions, there isn’t much on TV, after ten o’clock there wasn’t even any cell phone service, all I can do is take a shower and go to sleep.”

Some of the tourists feel secure and safe in the military presence, “The stability maintenance forces of our country are really powerful, a post every five steps, and a sentry every ten. Security is stricter than at an airport, every five minutes a squad of police pass by, every ten minutes a squad of Special Police, every half hour a company of troops.”

But another asks: “There are more People’s Armed Police and regular police than other people combined. Is that really necessary?”