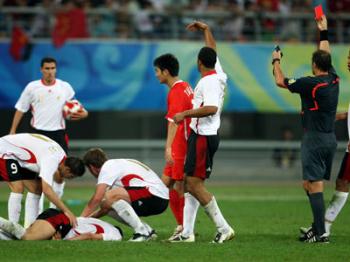 Two Chinese soccer players have again displayed poor sportsmanship during a game against Belgium which left Belgium’s Pocognoli with an injured groin. The English publication of Shanghai Daily ran a commentary on August 13 saying “The day sports turned to shame.”

Belgium led 1-0 into the second half, and the Chinese became more desperate against the tight Belgium defence, resulting in a red card against China’s Wangsong Tan for a vicious foul when he kicked Belgium’s number 5 Sebastian Pocognoli in the groin at the 53rd minute. Eleven minutes later, China’s Zhi Zhen elbowed his opponent and was sent off by the referee. Two other Chinese players were also handed yellow cards, and China finished with a 2-0 loss.

The foul against Pocognoli has landed the Chinese team with scathing criticism from both commentators and fans. The foul unfolded when Tan missed the ball with his foot in defence and instead kicked his opponent in the groin. Pocognoli was taken off the field bleeding from his lower body.

Shanghai Daily’s commentary said, “No sane Chinese fan expected the Chinese men's soccer team to win, but the team had a way to surprise the nation and the world—two Chinese players were red-carded for barbaric acts.” The author linked the Chinese soccer team to hooligans commenting that deliberate brutal physical abuse is common in domestic matches and said “The soccer system in China must be revamped to stamp out bureaucracy, corruption and brutality”.

The Chinese men's soccer team seems to be accustomed to red cards, from the first one at the Doha Asian Games to the latest, the team has received 11 red cards in 50 international matches in two short years.

The malicious actions of Tan have stirred Chinese soccer fans with one blogger commenting that “regardless of what happens, how can a player kick someone there? The National Olympics team is really too dark.” Another condemned the men’s Soccer team saying they “have lost face for all the Chinese people in front of the whole world."

Another blogger wrote satirically “soccer finally returns to its original nature in China—entertainment”. When barbaric behaviours have become a specialty for its players, the attraction of the Chinese men’s soccer team is no longer the score line but the constant scandals. Three months ago, the State Sport General Administration of China proposed the soon-to-be Olympians, that they “do not disgrace, do not create chaos and do not smear”. This seemed even too much to ask for some. Events during the match again shamed soccer in China. Again proving to outside observers that “when you think the male soccer teams have sunk to rock bottom, they always manage to fall even lower.”

Pocognoli did play in a subsequent match against New Zealand, showing his injuries may not have been as severe as first suspected, but there have been reports that two Belgian medics have made complaints to the International Olympics Committee over the incident.