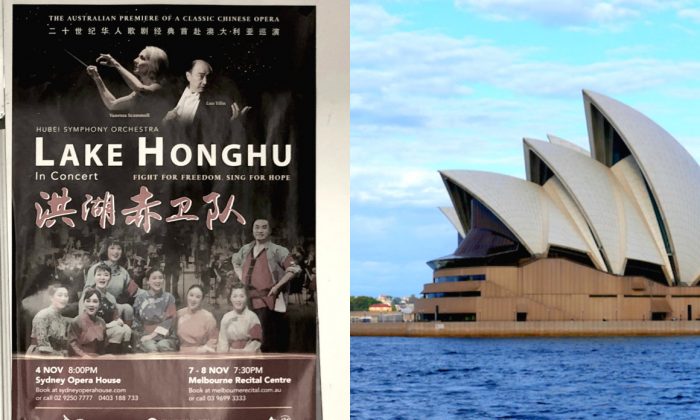 L: A poster of Lake Honghu on a fridge at a fruit market in Hurstville, NSW. (Mimi Nguyen Ly/The Epoch Times) R: A photo of the Sydney Opera House in Sydney, Australia, in 2018. A group of Chinese have raised concerns over an upcoming performance, Lake Honghu, coming to the Sydney Opera House on Nov. 4, 2018, calling it part of the Chinese Communist Party's strategy to wield soft power and exert influence in Australia. (Loritta Liu/The Epoch Times)
Australia

Some Australian-Chinese are calling out what they say is a new attempt by the Chinese Communist Party (CCP) to export influence to Australia via soft power, by raising their concerns about a modern Chinese concert titled “Lake Honghu” to debut in Sydney and Melbourne in November.

The production, to be shown at the Sydney Opera House for one day on Nov. 4, and at the Melbourne Recital Centre for two days on Nov. 7-8, centres around the military conflicts between the Kuomintang (KMT, or Chinese Nationalist Party) and the CCP that occurred around 1930 in Hubei—part of the Chinese Civil War between the two groups that spanned 1927 to 1950.

“The powerful Chinese opera … tells a story of freedom and hope on the shores of Lake Honghu,” the Sydney Opera House website reads.

But some critics say the performance will be devoid of any such qualities, and that it’s more “artistic propaganda” that’s aimed at promoting communist ideology and glorifying the CCP.

“The ‘Honghu’ opera is not about freedom or hope,” reads a statement from the Australian Values Alliance (AVA), a Chinese-Australian community group opposed to the CCP’s influence in Australia. They have launched an online petition.

In 2016, the AVA had raised concerns about concerts which celebrated former CCP leader Mao Zedong, which were eventually cancelled. In 2017, the AVA held protests against the performance “Red Detachment of Women,” by the National Ballet of China which was held at the Arts Centre Melbourne.

Ding Li, an editor from the Chinese version of Voice of America (VOA), refers to the production as “artistic propaganda in Australia” in an article he wrote for VOA.

Profit and Propaganda for the CCP

The organizers of “Lake Honghu” have alleged links to the CCP, raising fears that the opera is another tactic in the CCP’s toolkit and plan to exert influence in Australia, Chen Yonglin, a former consul for political affairs in the Chinese consulate in Sydney who defected from the CCP in 2005, told Chinese language Epoch Times.

The host for both Sydney and Melbourne shows is listed on the websites of Sydney Opera House and Melbourne Recital Centre as Ausfeng Event Productions (Ausfeng). Ausfeng has been hosting a multitude of events that are sponsored by CCP media and endorsed by CCP entities.

One example is the recent “Happy Spring Festival Chinese Culture Series” held in Sydney, Melbourne, and Adelaide, a series of many events over the 2018 lunar new year period. On the event series’ official website, a list of “partners” include CCP bodies like the Chinese regime’s Ministry of Culture, the Chinese Embassy, and the Consulate-Generals for Sydney, Melbourne, and Adelaide. The main media sponsors of the event include the news website of the CCP’s mouthpiece newspaper, People’s Daily.

According to testimony submitted to Australian parliament by academic Clive Hamilton and researcher Alex Joske, the ACETCA has “maintained close ties” for over a decade with the CCP, and one of the CCP’s key United Front Work Department (United Front) groups in Australia, the Australian Council for the Promotion of the Peaceful Reunification of China (ACPPRC) (pdf).

The CCP’s United Front is tasked with carrying out influence operations among overseas ethnic Chinese communities, including in Australia (pdf), and has been a key apparatus in the CCP’s propaganda warfare campaign since the time of Mao Zedong (pdf).

Chen, a member of the AVA, alleges that Ausfeng is making money from engaging in “so-called Sino-Australian cultural, economic, trade and tourism exchanges and cooperation, as well as immigration agents and visas.”

“They help apply and get visas and help arrange the trips for Chinese performance groups, rent venues, and then help promote and advertise [the performances]. They make money from it.”

According to Professor Feng Chongyi, a University of Technology Sydney Associate Professor in China Studies and also a member of the AVA, some Chinese organizations have taken the opportunity to promote such China-Australia cultural exchanges for profit and propaganda.

“[They are] turning it into a commercial operation and cultural industry, bringing Chinese programs from mainland China. They are not only gaining profits [for the CCP and themselves], but also use such activities to show their loyalty and patriotism to the Chinese Communist Party,” Feng told The Epoch Times.

Ausfeng has not responded to The Epoch Times’ request for comment. Robert Feng could not be reached for comment at the time of the article’s publication.

Alongside Ausfeng, “Lake Honghu” in Melbourne is also co-organised by three other groups—the Hubei Association of Australia, the Australian-Hubei Chamber of Commerce, and the Huaxing Arts Group of Melbourne, according to Chinese media.

Feng has raised questions about the three groups’ relationship to the CCP.

The three groups’ initiatives have previously received support from the Chinese Consulate General and the Overseas Chinese Affairs Office (OCAO), an office under the Chinese central government’s State Council.

The OCAO is a Chinese government agency responsible for drafting, planning, and implementing policies for overseas Chinese affairs, according to academic and author Clive Hamilton, in his book, “Silent Invasion.”

The three groups are headed by the same chairman, Zhou Jiuming, according to their website.  Zhou Jiuming is listed as one of the honorary presidents in the seventh term of the seventh advisory group of the ACPPRC.

On Feb. 28, the Huaxing Arts Group of Melbourne co-sponsored the “Chinese Spring Festival Gala” held in Melbourne at the Palais Theatre—an event that was supported by the CCP’s Consulate General, and hosted by OCAO.

The event was subsequently broadcasted by CCTV4 the following day. CCTV stands for China Central Television, and is the official Chinese state broadcaster.

The three groups have not responded to requests for comment from The Epoch Times, and Zhou Jiuming could not be reached for comment by the article’s publication.

The OCAO in Beijing has also given millions of dollars to Nanhai Media, a Sydney-based media company, for the latter to put on Lunar New Year celebration events in Sydney, the Sydney Morning Herald reported. The OCAO recommends the use of traditional festivals for propaganda and networking purposes, according to secret OCAO documents that were uncovered by New Zealand academic James To, and cited by “Silent Invasion.”

The deputy chief of OCAO, He Yafei, was quoted by “Silent Invasion” as saying: “As the standing of overseas Chinese rises abroad… they will have the desire… to collect their power in order to push forward the development and advancement of China.”

The upcoming “Lake Honghu” concert claims to be a modern take on the original Chinese revolutionary opera titled “The Red Guards of Lake Honghu,” or “Honghu Chiweidui” in Chinese. The original production debuted in 1959 (although some sources also say 1956) in Wuhan City, Hubei Province and was later adapted into a film in 1961.

The original opera presents a partially fictional account of how the CCP’s Red Army incited local people to fight against the KMT’s Nationalist Army for control of a village, namely the Honghu Base Area, in 1930. The opera portrays the Red Army and its chief, He Long, in a positive light and employs songs that glorify them.

In their statement, the AVA questions the production’s content.

“The Red Army killed massively during the Long March, especially targeting the landowners, many of whom were innocent peasants,” the AVA said in their statement. “They killed … to the extent [that] it was against humanity.”

“The killings remind us of the brutal acts of the Nazi Germany that targeted Jews for massacre … [The Red Army] are now portrayed [in the Lake Honghu concert] as heroes; how would this be fair to those who were killed?”

The lyrics in one song titled: “Wave after Wave in Lake Honghu,” read: “The Communist Party is benevolent, greater than the East Sea.”

Feng told The Epoch Times that the opera’s messages and content are reminiscent of the Cultural Revolution, which contributed directly to the unnatural deaths of tens of millions.

“It is horrible to look back … It is murder and does not respect human rights at all. It is a very violent cultural form,” Feng said.

“However, this is part of the Party culture, and the CCP continues to propagate this culture overseas, a culture that’s so incompatible to today’s world.”

Li of VOA pointed out the organizers’ change of the concert’s name from “Red Guards on Lake Honghu” to “Lake Honghu” in its promotions. At a press conference for the show on Oct. 10, the production still had “Red Guards” in its title.

The words “Red Guards” are well associated with the political Chinese Cultural Revolution in modern discourse. Li believes the omission of “Red Guards” downplays the political connotations of the production in an effort to make the show sound appealing to Westerners.

But “Lake Honghu” is actually “the political activity of the CCP’s massive international communications strategy,” Feng tells The Epoch Times. He says that while the opera is being shown under the guise of promoting culture, it is actually part of the CCP’s many efforts to exert its cultural and political influence overseas.

The Sydney Opera House released a statement in response to The Epoch Times’ request for comment.

“Lake Honghu in Concert is being presented by a third-party venue hirer, Ausfeng Event Productions. It is not part of the Sydney Opera House’s artistic program.”

A contact person speaking for the Melbourne venue where “Lake Honghu” will be performed, the Melbourne Recital Centre, told The Epoch Times over the phone that they “do not have any comments to make.”

Nina Yan of the Chinese language Epoch Times contributed to this report.